A Witness of Life and Joy 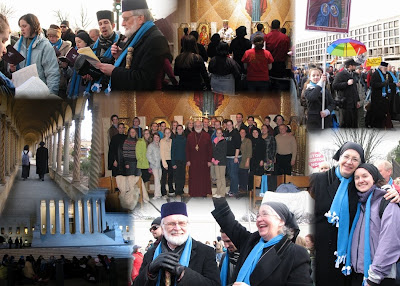 We had a great time at the March for Life this year with the teen group we organized through the eparchy. Instead of writing a new post, I'll just post my article which will appear in the upcoming edition of our eparchy's newspaper, Horizons. You can click on the collage above to zoom in.


The ByzanTEENs joined a massive convergence of people celebrating life and praying for an end to abortion at the 37th Annual March for Life in Washington, D.C., on Friday, January 22.

Departing the Cathedral of St. John the Baptist in Parma, Ohio, at 5:30 a.m., the sleepy teens, many of whom would be attending the march for the first time, did not quite know what they would be experiencing. When the group of 13 teens, 10 young adult and adult chaperones and one priest (Fr. Mychail Rozmarynowyz, St. Basil, Sterling Heights, Mich.) stepped out of the Metro station in the center of D.C., a scene of an estimated 300,000 people stretched out in front of them.

“It was a very life changing experience to see all of the people there supporting the same cause,” said Rachel Pawluszka, a teen from St. Basil in Sterling Heights, Mich.

“Seeing all of the other people there at the March got me to think about what we were marching for,” said Cathedral teen David Bratnick. This year’s march took place in the midst of the national health care debate, in which federal funding of abortion is the major issue at stake. Many signs read, “Abortion is not Healthcare.”

The group met up with Bishop John, Fr. Richard Plishka and several of the Byzantine seminarians and marched to the Supreme Court building, following an icon of the Visitation depicting Jesus and John the Baptist in the wombs of their mothers. The young adults led the singing of Marian hymns using portable speakers.

“Everybody was asking questions about the icons, which I thought was cool,” said Pawluszka.

At the Supreme Court building various groups paused to sing or pray in their own unique expressions as the mass of marchers continued to pour around the corner and in front of the building. The ByzanTEENs stopped at the edge of the crowd to share their own gift by praying the Akathist to the Mother of God, led by Bishop John.

Numerous marchers paused at the circle of Byzantines to listen for a while to the words and melody of this beautiful prayer. One man planted himself next to the icon sign holding a sign of his own that read: “When Elizabeth heard the greeting of Mary, the babe John leapt in the womb…(Lk 1:41)” He smiled at the group as he stood there, knowing that his sign described this icon perfectly. In this and in so many ways, the group was united to all of the many other marchers.

Just as the Akathist was finished the march ended. The group ate dinner nearby and then returned to the Supreme Court building, which was now lit up against the black sky. The marchers were gone and the streets had been returned to their usual car traffic. The teens sat in front of the steps as young adults Jessie Houck and Julie Hritz gave a reflection and led the group in prayer.

The group stayed overnight at Epiphany of Our Lord Byzantine Catholic Church in Annandale, Va., where they prayed compline at night with Bishop John and third hour in the morning. On Saturday the 23rd, the group explored several of the Catholic sites in D.C., including the Pope John Paul II Cultural Center and the Franciscan Monastery of the Holy Land in America. For lunch the group took a break at the Ukrainian Catholic Monastery of the Holy Cross.

The trip concluded with vespers and Divine Liturgy at the Basilica of the National Shrine of the Immaculate Conception. The beautiful Liturgy was celebrated by Bishop John in the Byzantine chapel, and attracted the attention of pilgrims visiting the various chapels in the Basilica. Many stopped to experience part of the Liturgy.

Bratnick enjoyed capturing the trip on video along with young adult Jenny Forkal. “I plan to edit the video with Jenny at the Eastern Christian Media Studio,” he said, and he hopes to incorporate the funny moments of the trip along with the serious.

Pawluszka said, “I would tell someone who wants to come next year to bring their walking shoes because it’s going to be a blast. There were so many cool things that we did this year and next year should be even better!”
Posted by Mother Cecilia at 8:42 PM

Email ThisBlogThis!Share to TwitterShare to FacebookShare to Pinterest
Labels: March for Life