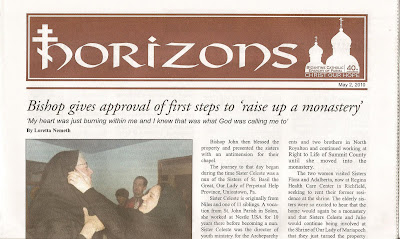 We are honored to be featured on the front cover of the most recent issue of our eparchial newspaper, Horizons. A big thank-you goes out to editor Lory Nemeth for a great article. We are excited to get the word out about the development of our monastery to the people of the eparchy, and we look forward to our increasing involvement in the life of the Church. As the article states, we invite all to our upcoming spring work day and cookout, Saturday, May 22. Please RSVP! Thanks!

BURTON, Ohio — On Monday morning of Holy Week, March 29, following the celebration of Bridegroom Matins in the chapel of the former residence of Mariapoch Sisters Flora and Adalberta, Bishop John gave his approval of the first steps to the establishment of the Monastery of Christ the Bridegroom there. Acknowledging that Julie Hritz and Celeste Strohmeyer have lived a modified monastic life at the residence for over a year and have formulated a draft typicon to govern a monastic community of women, Bishop John asked for their commitment "to continue this endeavor to its canonical establishment and your full membership."

Following their agreement, Bishop John gave them the following permissions:

•to maintain a private chapel, with the privilege that Divine Liturgy served there will satisfy one’s obligation for Sunday and holy days of obligation, and

•to use some of the monastic symbols: to preface their baptismal names with the title "Sister" and to wear a common garb whenever representing the monastery.

Bishop John then blessed the property and presented the sisters with an antimension for their chapel.

The journey to that day began during the time Sister Celeste was a nun of the Sisters of St. Basil the Great, Our Lady of Perpetual Help Province, Uniontown, Pa.

Sister Celeste is originally from Niles and one of 11 siblings. A vocation from St. John Parish in Solon, she worked at Nestle USA for 10 years there before becoming a nun. Sister Celeste was the director of youth ministry for the Archeparchy of Pittsburgh. "I liked where I was," she said, but felt God calling her in a different direction. Unsure of what the direction was, Sister Celeste said it started to materialize through casual conversations with Bishop John about his vision and finally with his open letter to invite the establishment of traditional Eastern monastic communities in the eparchy.

Bishop John’s invitation letter also hit home with Sister Julie. "When I was reading the letter, my heart was just burning within me and I knew that was what God was calling me to," she said. Sister Julie was in her final semester at the University of Akron and living on campus at the time she read the letter. After praying about it, she wrote a letter to Bishop John, expressing her interest in a monastic community. Sister Julie is a member of St. Joseph Parish in Brecksville and after graduation lived with her parents and two brothers in North Royalton and continued working at Right to Life of Summit County until she moved into the monastery.

The two women visited Sisters Flora and Adalberta, now at Regina Health Care Center in Richfield, seeking to rent their former residence at the shrine. The elderly sisters were so excited to hear that the home would again be a monastery and that Sisters Celeste and Julie would continue being involved at the Shrine of Our Lady of Mariapoch that they just turned the property over.

Sisters Celeste and Julie, along with many, many volunteers, began renovating the house in January 2009. The house was still under major renovation when the women moved in April 3, 2009. They and their helpers pulled down paneling, installed dry wall and tore down a wall to expand the chapel. "New life was generated there," said Sister Celeste, "with people coming in, really giving of their time, giving us things that we needed."

"The first summer we were there, we were already able to help out with activities at the shrine, host the girls’ camp and host two discernment retreats," Sister Julie said.

Their project over the winter and spring was to compose a provisional typicon, a monastic rule of life for the community. The sisters said that their typicon was inspired by John Paul II’s document "Orientale Lumen." In that letter he "encouraged the rediscovery of Eastern monasticism, especially in the United States … and called the church to support these monasteries," said Sister Julie. They also looked at the typicons of other Eastern monasteries. "We made it our own unique typicon by incorporating our own spirituality of the spousal relationship with Christ," she said.

The ceremony on Holy Monday "made us a part of the eparchy as Christ the Bridegoom community and commissioned us to begin it, so we promised to live by what we’ve spelled out in our typicon," Sister Julie said.

Sister Celeste commented on the day: "I felt excitement, more grounded – for me personally, it was neat that I could be called ‘Sister’ again … the bishop’s presence, especially during Bridegroom Matins, that was such a very significant and intimate connection with the eparchy, Jesus Christ, our community … it culminated that sense of unity."

Sister Julie said she "felt kind of nervous about making that commitment," but she said she was also glad that they could "take this step to move ahead with the formation of the monastery. … It was good to have Bishop’s concrete support."

Sister Julie also said, "I felt more deeply our need for the prayers of the church to help us at this time."

The sisters see their ministry as prayer and hospitality, welcoming people and helping them to understand and nurture the spousal relationship with Christ. Right now, they can host individuals who need to get away and have a personal retreat. Future goals include working with youth and families, especially at the shrine pilgrimages, and to be able to host formal retreats for small groups.

The sisters invite helpers to their next work day at the monastery, Saturday, May 22, beginning at 10 a.m. The day will include lunch, great vespers and a cookout. They ask that volunteers planning to attend contact them at (440) 834-0290 or by e-mail at christthebridegroom@gmail.com.
Posted by Mother Cecilia at 11:41 AM