Sr. Celeste and I again helped to coordinate the Eparchy of Parma's trip to Washington, DC, for the March for Life, an endeavor we find very important, and also one that is a lot of fun and so fruitful! (Although not without a lot of work and stress!--but totally worth it!)  Here is a preview of our article which will appear in the February 28 edition of our eparchy's newspaper, Horizons.  Enjoy! 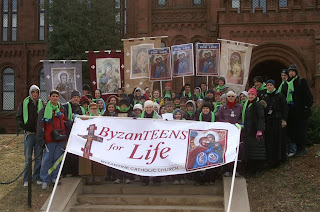 “Rejoice, O Stole for those who lack freedom to speak,” the ByzanTEENS and fellow Byzantine marchers sang together as they prayed the Akathist to the Mother of God in front of the Supreme Court building.  Completing their chilly but joyful pilgrimage through Washington, DC, January 23-24, 2011, the group of almost 100 Byzantine Catholics and friends stood surrounded by a very visible collection of icon banners, witnessing their unique and expressive faith to the notice of probably thousands of marchers, several bloggers and even LifeSiteNews.com.

The pilgrimage began for the Eparchy of Parma’s group on Saturday, January 22, the anniversary of the Roe v. Wade Supreme Court decision that had made abortion legal 38 years ago.  About 50 teens, young adults and adults from Illinois, Indiana, Michigan, Ohio and Pennsylvania gathered at the Cathedral of St. John the Baptist in Parma, Ohio, for the vigil Divine Liturgy, followed by pizza, introductions, the assembling of the group’s matching scarves, the painting of a banner and compline (night prayer).

At 6:00 a.m. on Sunday, January 23, the bus load of already sleep-deprived but energetic marchers departed the Cathedral.  On the way to DC, the group watched the video “Nine Days that Changed the World,” a recent film about Pope John Paul II’s nine-day visit to Poland in 1979 when the country was under communism.  In small groups on the bus, the marchers had the opportunity to discuss the film and make connections between the experience of millions of Poles gathering together during the pope’s visit and the experience they would be having at the March for Life.  Luke Iyengar, 16, of Holy Ghost parish in McKees Rocks, Penn., commented to the whole group that although the secular media will distort the facts of the march or ignore it altogether, just as the media did in Poland, he pointed out that his fellow marchers on the bus had cameras and video cameras.  “They [the Poles in 1979] did not have Facebook or YouTube, but we do!” he exclaimed, encouraging his fellow marchers to share the truth of their experience on the internet.

When the bus arrived in Washington, DC, the marchers were dropped off at the United States Holocaust Memorial Museum for an even more intense reflection on historical events that have much to teach modern society.  This experience “made me realize even more that we have to speak out and stand up for what is right,” said Darlene Hritz of St. Joseph parish, Brecksville, Ohio.  “After visiting the Holocaust Museum I realized how truly precious life is and it made me grateful for all I have,” said Madie Pochatko, 15, of St. Michael parish in Hermitage, Penn.

The marchers then trekked out into the freezing evening to the Washington Monument and the Lincoln Memorial.  At the bottom of the steps of the Lincoln Memorial in a shivering huddle, teens took turns reading quotes from Abraham Lincoln and Martin Luther King Jr., further tying together historical events through the words of two of our nation’s great leaders on the respect for life and the rights of all.

The hungry group then arrived in Annandale, Virginia, at Epiphany of Our Lord Byzantine Catholic parish, welcomed by the wonderful hospitality of parishioners and greeted by ByzanTEENS from Epiphany parish, Philadelphia and Long Island, New York.  After dinner the teens had time to get to know each other and enjoy card games before they headed back out to DC for Byzantine compline at the Basilica of the National Shrine of the Immaculate Conception, celebrated by Bishop William of the Eparchy of Passaic.  Hundreds of Roman Catholics also participated in the service.  Bishop John, of the Eparchy of Parma, gave the homily, and explained that the unborn teach us that faith is about a relationship with Christ—one that they have not broken as we have.

After the night spent at Epiphany parish, the group prayed Third Hour in the church and was blessed by another delicious meal provided by the parish before heading off to the March for Life.  Arriving at the National Mall (the large open space in the center of DC), the ByzanTEENS assembled their icon banners and “ByzanTEENS for Life” signs printed with an icon of the Visitation depicting Jesus and John the Baptist in the wombs of Mary and Elizabeth.  The group was among the first thousands of marchers (mostly teenagers and young adults) who were gathering on the Mall near the stage, where politicians and religious leaders were giving speeches.  Thanks to a new large banner designed by Eikona Studios and printed and assembled with tall PVC pipes by Epiphany parish, the “ByzanTEENS for Life” were a landmark in the crowd and a popular photography subject.  Other Byzantine groups and individuals were able to join the growing group because of the banners, including Bishop John, several priests and a group from Sts. Cyril and Methodius parish in Cary, North Carolina. 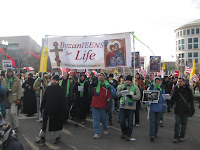 As the march began, Parma Youth Choir director Bryan Scotton led the singing of Marian hymns which continued for the duration of the march, drew additional Byzantines to the group and attracted the attention of nearby marchers.  Scotton, participating in his first March for Life, was impacted by seeing “so many young people, in our church particularly, standing up for something that is right and true, in a society that is trying so hard to convince them otherwise.”

Young adult Kristin Striker (St. Columbkille, Parma, Ohio) said, “I loved the prayerful intention of the trip.  It was more of a pilgrimage atmosphere than just a fun trip.”  For Jessie Houck (St. Francis de Sales, Akron, Ohio), the best part of the trip was singing Marian hymns.  She said, “It was so great to lose my voice in supplication to our mother for those who cannot speak up for themselves.” 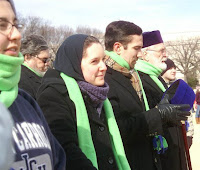 As the marchers ascended the Constitution Avenue hill, marking the last stretch of the march, veteran marchers in the group prodded the others to look behind them.  From their viewpoint they could see an incredible stream of hundreds of thousands of people, stretching father than they could see.  Zachary Knoblauch, 12, of St. Mary parish in Whiting, Ind. commented, “I was impacted by how many people wanted to stop abortion.”

The march concluded in front of the Supreme Court building, and the group stopped there to pray the Akathist to the Mother of God.  Many marchers passing by paused to listen or accepted an invitation to share a book and join in.  Andrea Trompak, 16, of the Cathedral of St. John the Baptist, said, “My favorite part of the march is praying the Akathist in front of the judicial building…I loved being able to share this experience with my good friends and randomers from the march!”  An adult participant commented, “One of our young members brought a friend…I saw the two of them singing the Akathist—this was an incredible sight.”

Amidst the estimated crowd of 400,000, the intensity of the Byzantines’ prayer was not unnoticed, as illustrated by the follow-up article by John-Henry Westen on LifeSiteNews.com, a prominent Internet pro-life news service:

“Long after most marchers had dispersed, a group of young people remained across the street from the Supreme Court, heads bowed in solemn prayer.  Their sign “ByzanTeens for Life” signified that they were Byzantine Catholics known for their intense and lengthy prayers.  Rachel Pawluszka, 16, one of the ByzanTeens, told LifeSiteNews that the best thing about the March for her was meeting so many others, even those of different religious backgrounds, who all share the love and reverence for life.” 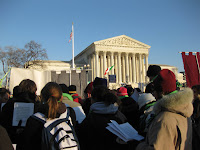 As the Akathist was ending, the final marchers filed past and police restored the street to its usual busy car traffic.  Hugs were given and goodbyes said as the various Byzantine groups departed for their own ways home, and the group from Parma headed to Union Station for dinner before departing DC.  Arriving in Parma at 2:15 a.m. the sleepy marchers managed to wake up enough to sing one more time as they wished “God grant you many years” to their bus driver.  The last official word of the trip came from the bus driver, Andrey, originally from Belarus, who exclaimed, to their surprise, “Christos Voskrese!”  Even though it was not the traditional time of year for this greeting, (meaning “Christ is Risen!”), they exclaimed in reply, “Voistinu Voskrese!”, and after a trip filled with so much joy and hope, there was a truly tangible sense that “Indeed He is Risen!”

The trip was not only an opportunity to stand up for the dignity of human life but also to share Byzantine spirituality with Roman Catholic friends.  “I really enjoyed seeing a glimpse of the beauty of the Eastern Church,” said Striker.  Amanda  Jancewicz, 13, of St. Ambrose parish in Brunswick, Ohio, commented the day after the trip, “It truly was an awesome and moving experience for me to be a part of the fight against abortion.  I enjoyed seeing the differences between the Byzantine and Roman Catholic religions, and hope to continue to be a part of the religious retreats and activities the ByzanTEENS offer.  I have enjoyed the trip so much that I am going to be presenting my experience at my school, Saint Ambrose, tomorrow.”

Besides LifeSiteNews, several blogs noted the “ByzanTEENS for Life” and included a picture of the group’s icon signs in their blog entries following the march, including a National Catholic Register blog by Steven Greydanus, a popular blog by Fr. John Zuhlsdorf and the blog “Lead Kindly Light.”  The group was also seen on EWTN’s live television coverage of the event.
Posted by Mother Cecilia at 9:32 PM

Email ThisBlogThis!Share to TwitterShare to FacebookShare to Pinterest
Labels: March for Life, teens