Our Reflections on the Great Canon of St. Andrew of Crete (and a video!)

Last Thursday, about a dozen people joined us for all or part of the three-hour Great Canon of St. Andrew of Crete, which we prayed at the Cathedral of St. John the Baptist in Parma, Ohio.  As you may have read in our post advertising the event, the Great Canon includes hundreds of prostrations as we put ourselves in the places of the penitents of the Old and New Testaments and together with them, repent of our sins.  The Canon is a masterpiece of poetry.  In those three hours we are served a whole banquet of food for meditation.  The following short reflections are only three little morsels that we each spent some time chewing on...  And most of us are walking properly again by now...


You have not imitated, O my soul, the repentance of the sinful woman; taking the vase of perfume and mixing it with her tears, she poured it over the feet of the Lord, and with her hair, she wiped away the record of her sins.

This is one of the many verses prayed during the Great Canon of St. Andrew of Crete, which moved my soul to a breathless ache. When I prostrated myself on the floor, my whole being did not want to rise up, not because my legs were strained and burning from all the prostrations, but because I felt an overwhelming awareness of helplessness and unworthiness. I desired to wash the feet of Jesus with tears of repentance and gratitude.

Within the tension of sorrow and joy, I was moved with love and adoration and knew that when I rose, it was the redeeming love of the Bridegroom’s strong arms that would gently lift me up. With each prostration, I could fall down before Him and rise again with confidence from the words of the very first verse of the Great Canon, “The Lord is my help and my protection; He has saved me. He is my God and I will glorify Him, the God of my fathers, and I will exalt Him, for He is covered with glory.” 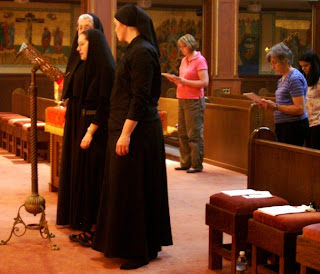 
Follow the example of the woman with the flow of blood, O my soul; * draw near and touch the garment of Christ * who will deliver you and say to you: * Take courage! Your faith has saved you.

Imitating the woman who was stooped over, O my soul, * draw near and bow before the feet of Jesus, * that He may raise you up * and that you may walk uprightly in the way of the Lord.

The well is deep, O Lord, * but You draw from your bosom the living water, * which I drink as did the Samaritan woman; * thus, I will no longer thirst, * for You refresh me with the waters of you life.


In at least a couple of places in the Canon, we were invited to imitate these women in the Gospels who encountered Jesus.  They were each wounded and found healing in Him.  What brought me to tears was the realization that each had approached Jesus, with whatever courage they could muster, and with openness and longing for healing.  They understood that they were wounded, they knew they desired something more, and they had faith that He was the answer; He was it!  I realized that I, like these women, should not be discouraged by my weaknesses and wounds, but instead draw near to Jesus and experience the intimacy that comes from allowing Him to touch and heal me.


Like Israel in the desert, O my soul, * you have preferred the impure ﬂeshpots of Egypt, * instead of the food of heaven.


"WOW."  That was my first thought when I read this line of the Canon.  My second thought was "What in the world is a fleshpot?!"  As I started to let my heart wrap around the phrase more than my head, an image came to mind that is often used by one of my favorite people, Christopher West.  (Christopher West is a leading teacher, writer and speaker on Blessed John Paul II’s Theology of the Body.)  Our bodies are meant to communicate to us who we are and how we are called to be in relationship with one another and with God.  Christianity actually invites us into this mystery, recognizing the great value of the body, unlike our culture, which promotes a ‘flaunt it if you got it,’ ‘live for today,’ ‘what happens in Vegas, stays in Vegas’ mentality.  So as Christopher says, we have been "eating out of the dumpster" that our culture has told is the only place that we can find food, and our un-Christian Christian upbringing has led us to the same dumpster, because we have been living in starvation mode, repressing and ignoring our desires, so any food looks like good food.  (Like the Israelites who desired the fleshpots of Egypt rather than following God into the desert… sounds familiar.)  But there is a heavenly banquet prepared for us!  We no longer need to look to the dumpster but to the food of heaven to feed our souls and bodies.  So, as I continued my prostrations, I reflected on God’s great desire to love us and to nourish us in a way only His love can – and that *almost* made me forget the pain!


Thanks to Miron Kerul-Kmec for recording and uploading this video!
Posted by Mother Cecilia at 11:39 AM