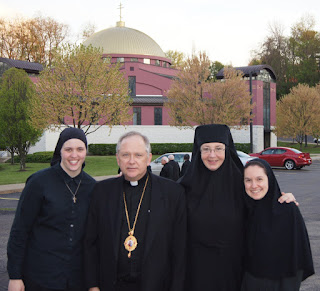 Last Wednesday we attended the enthronement of Metropolitan William as the fifth metropolitan of the Byzantine-Ruthenian Church in the United States, at the Cathedral of St. John the Baptist in Pittsburgh, Pa.  We were impressed by the huge number of bishops and clergy who traveled from all over the country (and the world!) to attend this important event in the life of our Church.  Metropolitan William was enthroned by the Papal Nuncio to the United States, Archbishop Carlo Maria Vigano.  Also in attendance were Cardinal Dolan of the Archdiocese of New York, many Eastern Catholic and Roman Catholic bishops, two Orthodox bishops, and representatives from other Christian denominations.  Among the Eastern Catholic bishops were bishops from Canada, Slovakia, Ukraine and Hungary!  We were honored to be part of such an event.

In his homily, Metropolitan William called the Byzantine Catholic Church to what Blessed John Paul II called the "new evangelization." Although Metropolitan William did not use this exact phrase, it is exactly what he was speaking about when he said that the greatest challenge that our Church faces is "the need to present Jesus Christ and his Gospel teaching in a way that touches the lives of our people."  He further explained, "In the same way that our beautiful liturgy has been translated in the many languages of the people of many different countries, we need to find a new method of teaching the faith that opens the mind to a deeper understanding of the faith. ... God has not changed, but the world has radically changed."  The new evangelization is a timely subject, as many throughout the Catholic Church are speaking and writing about this topic, especially in light of Pope Benedict XVI's formation of a pontifical council promoting the new evangelization.  In some sense, Metropolitan William has called the Byzantine Catholic Church in the United States to jump in to this movement of renewal within the Church at large.

We promise our prayers for Metropolitan William as he takes up this great responsibility and begins this new stage in his ministry and vocation.

Check back soon for a post about the visit of Metropolitan Jan Babjak (of the Archeparchy of Presov, Slovakia) to our monastery this past weekend! (During his trip to the U.S. for Metropolitan William's enthronement.)

Posted by Mother Cecilia at 2:47 PM