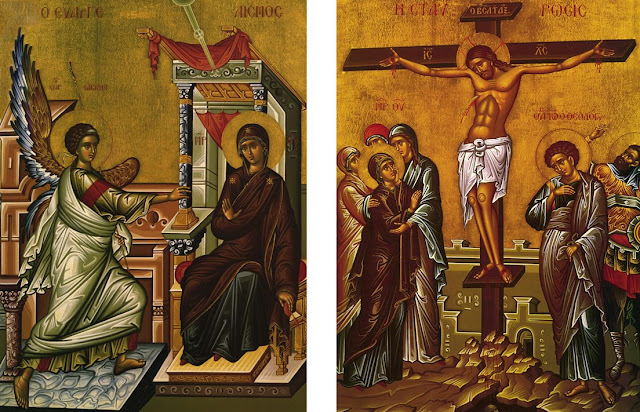 This year, Great and Holy Friday falls on March 25, the Feast of the Annunciation. The Byzantine Church doesn’t move the celebration of the feast, which might seem strange! However, I'd like to propose that it actually makes a lot of sense.

In these two events we see the awesome condescension of God, and we can look at both of them through the role of Mary, the Mother of God. First, at the Annunciation, God condescended to become man through Mary. Mary said “yes” in behalf of humanity, receiving in her body--as in a chalice--the gift of divinity, so that it could be poured out into the world in a way that we could receive it.

St. Ephrem beautifully expresses this mystery in one of his Hymns on the Nativity (#11):


Secondly, at the Crucifixion, the Lord made another great act of condescension: the acceptance of physical death. And again, Mary was there saying “yes,” this time in behalf of the Church, receiving the gift of eternal life that was pouring forth from Jesus on the cross, as He changed death into life.

The Festal Theotokion in Tone 4 clearly illustrates the connection between these two events of the Annunciation and the Crucifixion, as well as Mary's role:

The mystery hidden from all ages and unknown to the angels has been made known to those on earth through you, O Theotokos. God has taken flesh in a union without confusion, and willingly accepted the Cross for us; whereby He raised the first-formed Adam and saved our souls from death.


These two condescensions of God--these two parts of the mystery of the Incarnation--changed everything, and they happened at the beginning and end of Jesus’ earthly life. So even though we think of one as a joyful event and the other as a sorrowful, it doesn’t seem strange to me to commemorate them together. There is also a tradition from early in the Church to do just that! This tradition said that Jesus died on March 25: “He suffered in the thirty-third year, March 25th, Friday, the eighteenth year of Tiberius Caesar, while Rufus and Roubellion were Consuls" (Commentary on Daniel by St. Hippolytus, 170-240 A.D.). And as the perfect man, it was believed that He had been conceived and died on the same day, therefore making March 25 the date of the Annunciation. (Later, the date of His Nativity, December 25, was based on this calculation.)

Fun facts aside, this Great and Holy Friday is a beautiful opportunity for us to reflect deeply on the mystery of the self-emptying of Christ through the Incarnation, with the Mother of God as our teacher and model. We can allow her to teach us how we can be a chalice like she was—receiving the love of God and pouring it out to others by loving them, making it accessible to them and helping them to thirst for more.

This year we lose our Annunciation mitigation of the fast for fish and oil, we get a major headache trying to decipher the liturgical typikon, and we feel the awkwardness of celebrating the Divine Liturgy on Great and Holy Friday…but theologically it seems very beautiful and meaningful to me to celebrate these two earth-shattering events of the Incarnation on the same day. Disagree if you want!...It won’t happen again until the year 2157 anyway!

Posted by Christ the Bridegroom Monastery at 10:21 AM