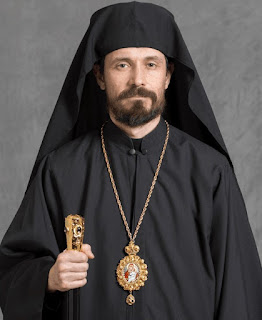 Bishop Milan's first pastoral letter to the Eparchy of Parma was read at our parishes--and our monastery--this past Sunday, inaugurating the eparchy's 50th-anniversary year. We are encouraged by his call to a renewal of the grace given at baptism, and we pray that all the people of the eparchy (and beyond) will accept this challenge.

On this day, as we celebrate the feast of the Theophany of Our Lord, I would like to open and dedicate this year — which marks the golden anniversary of the establishment of the Eparchy of Parma of the Ruthenians and of the Metropolitan Church Sui Iuris of Pittsburgh — as the year of renewal and deepening of our faith.

Blessed Pope Paul VI issued a decree February 21, 1969, entitled Quandoquidem Christus, which transformed the status of the Byzantine Catholic Church in the United States, creating the Metropolia of Pittsburgh with two suffragan eparchies — Passaic and Parma. Prior to that, when our ancestors came to this country and brought with them a desire to worship in their own rite and have their own churches, we were part of the Eparchy of Pittsburgh.

Fifty years provide the opportunity to look back and reflect on the life of our Church. We do this in thanksgiving, recognizing the many examples of sacrifice, piety, dedication and vitality that resulted in growth, especially in the 1970s and 80s. Without a doubt, many souls were led to their heavenly reward. With gratitude we remember that cloud of witnesses — the bishops, priests, religious and laity, who, in countless ways offered testimony to their faith.

The anniversary year also offers an occasion to acknowledge the negative events that weakened our eparchy and caused a loss of vitality and, at times, even a loss of hope for the future. We should approach the Lord with repentance in our hearts and ask forgiveness, individually and as an eparchy.

Above all, we need to look forward with hope. This is only possible with renewed faith and a firm decision to follow the Gospel that contains the commandments of Christ. If our hearts have abandoned this willingness, we should look into the reasons why. St. Theophan the Recluse says this happens when the grace given at baptism is not preserved. He provides the following causes:

1. Leaving the church and its grace-giving means, which starves the root of the Christian life, disconnecting it from its sources. In this way it wilts, just as a flower does when it is not watered.
2. Failure to pay heed to one’s bodily nature, which opens the door for passions to take hold of the soul.
3. Forgetting the main goal of life: People do not have direction and lack the means to achieve union with God.
4. Neglecting the spiritual life: Prayer, the fear of God and conscience are overshadowed by earthly cares.
5. Neglecting to put into practice Christian principles and God’s way of life.

Could this point to the lack of vitality in our individual faith and lives, and in the eparchy as a whole? I would like you to join with the clergy at your parish and meditate on these causes. My hope is that this exercise will lead to spiritual activities in your parish that could renew the grace of baptism in our souls. We must first, however, be convinced that personal holiness, which leads to salvation, is a priority. This will take courage and conviction. I challenge you to make a pledge to begin the process that leads to this goal. I challenge all priests to preach during this 50th-anniversary year about how to avoid the five points of St. Theophan the Recluse above and to teach the art of spiritual living, the importance of prayer and the sacraments, and of giving up small things for the sake of gaining everything.

We sing in the Kontakion of the feast of the Theophany of Our Lord the beautiful and profound words, “You have revealed yourself to the world today; and your light, O Lord, has set its seal on us. We recognize you and exclaim to you: You have come and revealed yourself, O Unapproachable Light.” Let us not be afraid to renew the grace of our baptism in us, to recognize the Unapproachable Light who has set a seal on us.

We pray at the Great Blessing of the Jordan Water: “The waters beheld you, O Lord; the waters beheld you and they trembled. The River Jordan turns back on its course as it beholds the fire of the Godhead coming down upon it and entering it in the flesh.” We need to understand that the River Jordan turning back on its course as Christ enters its waters is symbolically its turning away from the Dead Sea (death) towards the Sea of Galilee (life).

As we begin this year of renewal and of deepening our faith to mark the 50th anniversary of the Eparchy of Parma and the Metropolia, I exhort you to make a pledge to renew your faith, as well as our Church, with the pledge cards that were distributed to your parish and that may be found in a visible place in your church.

As we commemorate the Baptism of Our Lord, let us be mindful of our own baptism, when we first received the grace to live the life of Christian discipleship. I pray that we are renewed in our journey and that we accept Christ in our lives, so that Life can turn us back to life as individuals, parish communities, and as the Eparchy of Parma.

Sincerely Yours in Christ,

Most Rev. Milan Lach, SJ
Bishop of the Eparchy of Parma

Posted by Christ the Bridegroom Monastery at 2:44 PM