Wow, we are still recovering from the exhaustion and the explosion of grace that came in the midst of running Boys and Girls Camp, celebrating the 50th anniversary of our eparchy and of the Archeparchy of Pittsburgh, hosting Metropolitan Fülöp (the head of the Byzantine Catholic Church in Hungary) and three other clerics from Hungary, and receiving other international guests at the monastery, including Leonardo Cardinal Sandri (Prefect of the Congregation for the Eastern Churches), Msgr. Walter Erbi (representative of the Papal Nuncio to the United States), and priests from Slovakia. It was such an honor to receive all of our visitors and to learn from them. We were also so blessed to celebrate the 50th anniversary of our eparchy with the clergy and faithful, and we had a blast with all the teens at camp! We are so proud of them for coming with open hearts to encounter the Lord, and we are grateful to God that He is using this camp to help teach them how to pray. Enjoy these great photos from camp!

The following article is about the Boys and Girls Camp and will also be published in Horizons:

In conjunction with the eparchy’s 50th anniversary celebration, the eparchy’s annual Boys and Girls Camps were combined and held at the Cathedral of St. John the Baptist.  The change in venue provided teens with the opportunity to participate in the events celebrating this important mile marker in our church’s history.  The camps were led by the nuns of Christ the Bridegroom Monastery, with the support of many volunteers.

Camp began the afternoon of Wednesday, June 19, and concluded with lunch following the hierarchical Divine Liturgy on Saturday, June 22.  The 33 campers and several chaperones stayed at the cathedral, where they slept, shared meals, prayed together, played together, and learned together.

Thursday night, youth spent two hours praying in the cathedral, going to one of eight confessors for the Mystery of Holy Repentance.  Many campers identified this quiet time as their favorite part of the camp.  Lauren Kattler (13) shares, “When I was getting ready to go to confession, I felt him [God] there.” 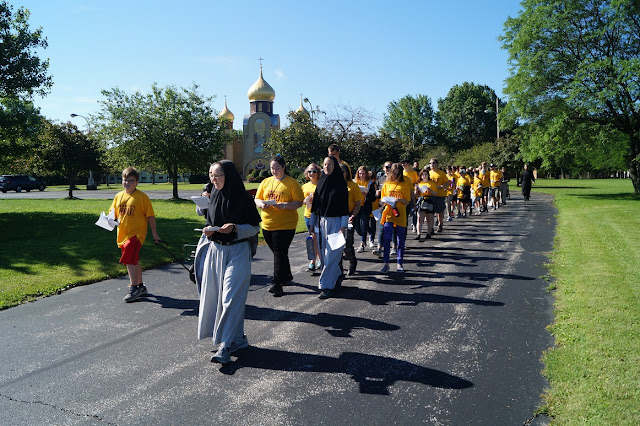 Campers participated in several unique events this year.  On Friday, they were joined by some families as they embarked on a walking pilgrimage from the cathedral to Holy Spirit Church in Parma, and back again.  In the cemetery at Holy Spirit, the pilgrims joined the clergy in praying a Panachida for the deceased clergy of the eparchy.  As the pilgrims walked, they sang and prayed, attracting inquiries from observers along the way.

In the afternoon, Cardinal Leonardo Sandri, Prefect of the Congregation of the Eastern Churches, talked with the youth at the cathedral, conducting Q & A.  That night, campers joined in the eparchial Parastas, and afterward some of them chose to keep vigil until midnight.

The camp’s theme this year was “Who do you say that I am?” (Mt 16:13-19)  Throughout their days together, campers were challenged by several talks exploring the reality that authentic personal identity only springs from Christ’s identity as the Son of God.  They were able to reflect on the talks together in small groups. 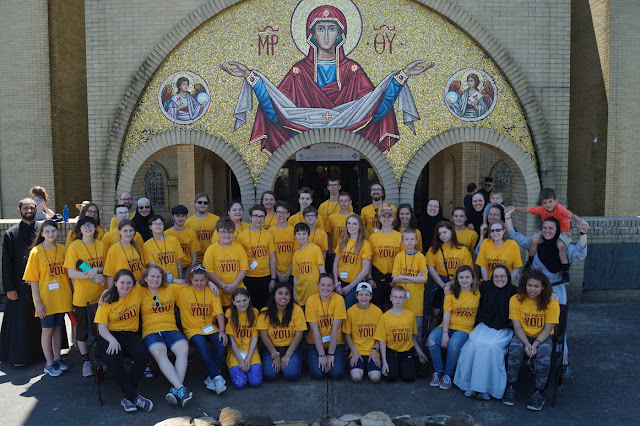 Mother Iliana, one of the nuns, spoke to them about prayer: “God wants to meet us where we are, without masks…God wants to waste time with us… And it’s there [in prayer] you’ll find out who you are.”

Gregg Stovicek, a theology teacher at Lake Catholic High School in Mentor, Ohio, told the campers that when Jesus asks, “Who do you say that I am?” Jesus is also inviting his disciples to put that same question back to him. Discernment, he said, is the process of asking God this question and listening for the answer, in order to come to an understanding of one’s true identity.

Recently-ordained Fr. Nathan Adams served as camp chaplain.  Sharing his conversion story with the youth, he said, “I focused all my energies on knowing about God and not knowing God… Don’t be fooled: this is no different than showing up at [liturgical] services and thinking that being there is the same as knowing God.”

Fr. Michael Lee, administrator of St. Luke Byzantine Catholic Church in Sugar Creek, Missouri, spoke of the mystery of our adoption as sons of the Father through Baptism.  “If ever you hear that the Father is angry with you, that’s a lie.  If ever you hear that you aren’t beloved, that’s a lie," because when the Father looks at us He sees his own Son.  He concluded, “Become who you are!  That’s the quest of the spiritual life:  not to become someone else, but to become who you are.”
Posted by Christ the Bridegroom Monastery at 2:47 PM