The Newest Fair in the Country 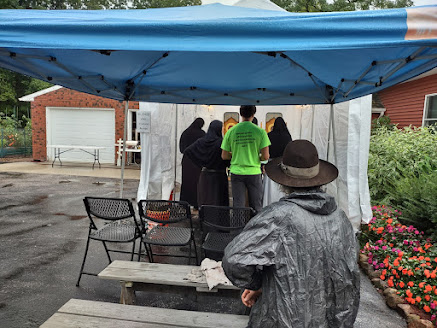 Last week, in community we were talking about the Geauga County Fair, which was celebrating it's 200th anniversary this past weekend and is just a few miles away from us. We learned that's it's the second oldest fair in the country, so we decided to create the newest fair in the country. Thus, our own personal monastery fair was born. Mother Natalia spearheaded the planning process, which included inviting a couple of friends, gathering supplies, and inviting all of us to plan some part of it if we'd like to. Sunday afternoon, amidst our usual rest time and much rain, some of us were preparing our contributions to the fair. We tried to keep everything a surprise as much as possible. Then we prayed Vespers, and it was time for the fair to begin. 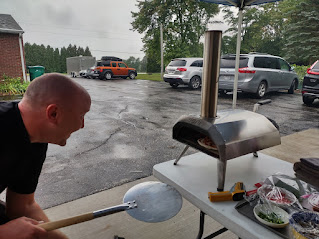 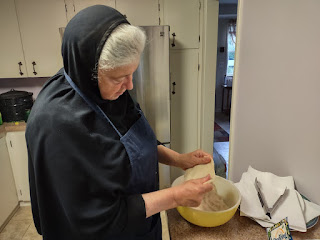 We opened it up with a corn shucking contest, and then it was revealed that one of our guests, Fr. Steve, brought a pizza oven. So we all took turns making pizzas.
Mother Theodora got to work making elephant ears and freshly squeezed lemonade. 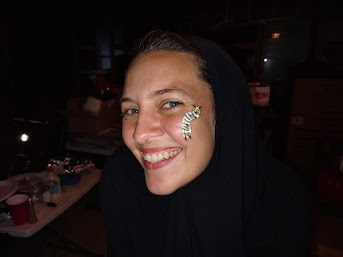 Mother Gabriella grilled a couple other food options, and Olivia opened up a set of face paints. The fair had begun, and the amount of rain steadily increased. 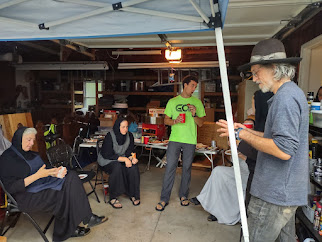 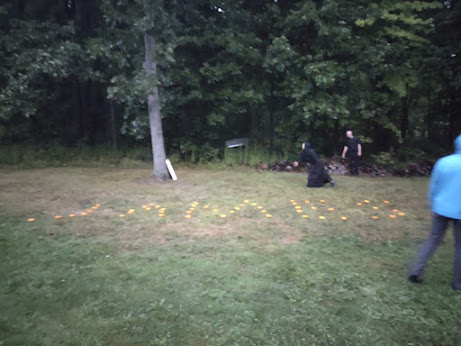 Mother Natalia and Fr. Steve provided us with the opportunity to try axe throwing near the fair's pumpkin patch (little orange gourdes that volunteered in our garden this summer which one of our other guests arranged to spell his name). 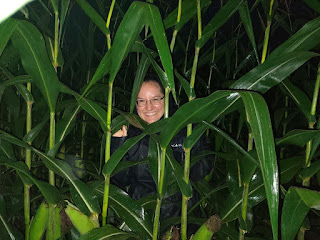 We also had a "corn maze," planned by Olivia and Mother Natalia. At this point, the sun had set, and it was pouring rain, so it was pretty spooky. The "corn maze" consisted in walking into a corn field near the monastery, and trying to get lost, and then getting out again. For the most part, we all split up, and it was very difficult to find one another because of the loudness of the rain and the corn stalks all around us. But no worries, we all made it out alive (but very wet). 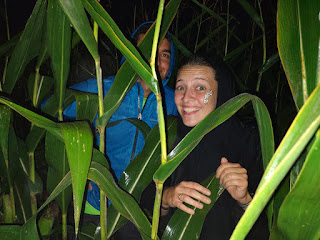 We did some more face painting. Below you can see Mother Gabriella sporting her monarch butterfly face paint. 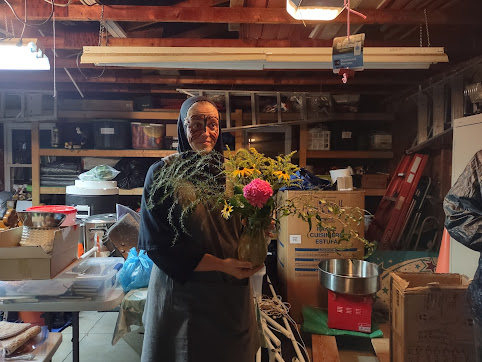 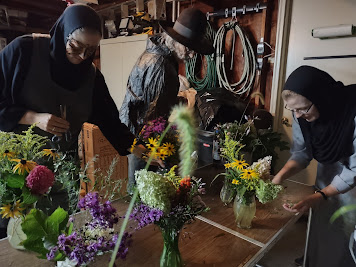 And then it was time for the final activity: a flower arranging contest. Mother Cecilia spent some time in the afternoon taking cuttings from various plants in our gardens and wildflower areas, and presented us all with many vases to choose from and three large buckets of flowers and foliage. She gave us twelve minutes to make the best arrangement we could, and she deducted points for complaining. She was a tough judge. After we all presented our arrangements to her in the garage, we all huddled under a tent, while the garage door was closed so she could award prizes in private. A few minutes later, the garage door was lifted up, and revealed that Mother Petra won first prize for a very nice woodland themed arrangement. Fr. Steve came in second, and Mother Natalia took third. 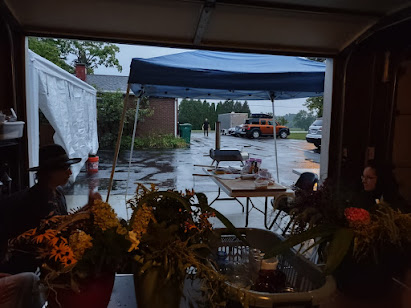 Altogether, we had so much fun, and we're thinking of making this a community tradition for our Sunday night recreation during fair weekend. And now, we'll have a whole year to come up with ideas instead of just a few days. It was really fun to be creative in so many different ways, to have everyone share their gifts, and to just get to play as a community.
Also, while you're here, just a reminder that our Fall Work Day is coming up on September 17th. If you're planning to come, please RSVP! As of right now, we're going to need a lot more volunteers! Please feel free to invite your friends. Thank you!

Posted by Christ the Bridegroom Monastery at 9:13 PM

Email ThisBlogThis!Share to TwitterShare to FacebookShare to Pinterest
Labels: Recreation