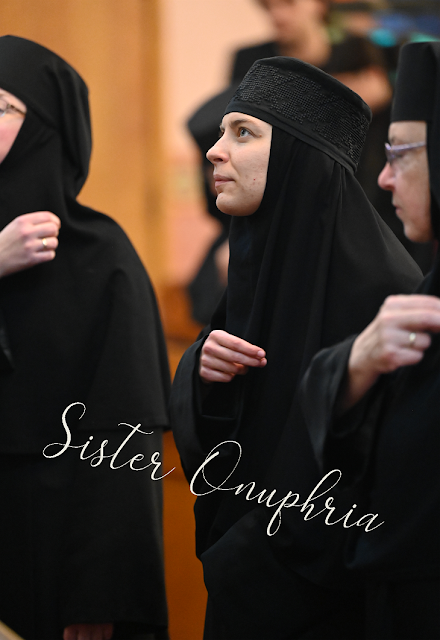 We are thrilled to share with you the monastic name of our newly tonsured rasophore nun--Sister Onuphria! She is named after St. Onuphrius the Great, a desert father whose feast day is June 12. Below, she shares about her patron saint.

I met St. Onuphrius for the first time during my observership. Someone mentioned him in a conversation joking that I could eventually be named for him, if I were to follow the tradition of taking a name with the same first letter of my baptismal name. I had never heard of him before. A couple of weeks later, I was flipping through books in the monastery library about the Desert Fathers, and I came across Paphnutius’s account of the life of Onuphrius. Out of curiosity, I began to read, and as I read about his life, my heart was burning within me. That night, I felt like Onuphrius adopted me. He felt so close. I didn’t think a hesychast from a millennium and a half ago could feel so close. He is my desert father, and has been my consistent companion since then, gently present as a light in dark times.

Onuphrius was a wild man. He had lived in solitude for sixty years when Paphnutius found him. Paphnutius recounts his first encounter with the Saint: “Suddenly, I looked in the distance. I saw a man coming who was completely fire, his hair spread out over his body like a leopard’s. Indeed, he was naked… Now when he came close to me, I climbed up on a mountain ledge, thinking he was a mountain man.” Onuphrius calls Paphnutius by name, having spiritual knowledge that he was coming.

The two go back to Onuphrius’ cell, and he tells Paphnutius his story. “I walk in the mountains like the wild beasts, and I live on plants and trees, and I have not seen anyone I know.” He started his monastic life in the Erete Monastery, a cenobitic community. He ached to live in the desert as Elijah and John the Baptist did. He sought to follow their lives of complete dependence on God in the desert where there is no human help for a man. Eventually, Onuphrius found an experienced solitary to teach him the eremitic life, and from that point onward, he struggled in the wilderness. After sixty years of struggle, he was so open to God’s love that he appeared to be on fire, and angels brought him the Eucharist. After Onuphrius tells his story and the two spend the night in prayer, Onuphrius breathes forth his spirit, and Paphnutius buries him and continues his journey, heartbroken that he couldn’t stay there.

The journey of Paphnutius is one of returning more and more to Paradise. Each ascetic he encounters as he goes deeper into the desert reveals to him a deeper layer of how monastic life returns us to Eden. Onuphrius is an image of this in his nakedness, in his total trust in the Father who provides him with everything he needs and in his dominion over the land. In this posture of utter dependence on his Father, Onuphrius burns with love as a “burnt offering wholly consumed.”

For me, Onuphrius is an image of a bride. He is totally given. When we chant the fourth chapter of the Song of Songs at Compline, I can’t help but think of him when we chant the invitation of the Bridegroom: “Come from Lebanon my bride, come from Lebanon, come! Descend from the top of Amana, from the top of Senir and Hermon, from the haunts of lions, from the leopards’ mountains.” The bride of God is a wild one, and Onuphrius images this for me.

Posted by Christ the Bridegroom Monastery at 8:23 PM No comments: