The End of Our Wandering and Today's Feast 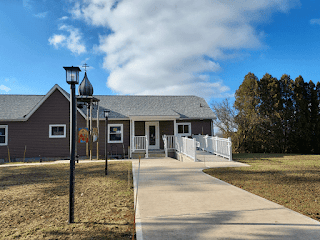 Glory to Jesus Christ!
Happy Feast of the Prophet Daniel and the Three Holy Youths! This is a feast we get pretty excited about at our monastery (well, at least the nuns who write the blog posts do!).
As we are now in the final stretch of the Nativity Fast, we'd like to let you know what life at the monastery has been like lately.
Since Sister Onuphria's Tonsure, the big focus (which we are striving to keep secondary to our life of prayer and hospitality) is the finishing of our chapel. As you can see, things ended up behind schedule, but we are so pleased to now be settling into our beautiful chapel. It's a really amazing place to pray already, and it's not even totally finished yet. 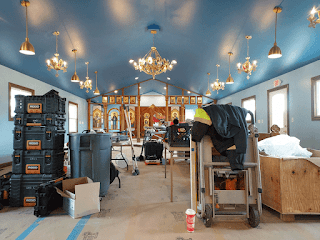 The chandelier was finally installed! However, like us, it's not perfect yet. When we turned it on, some of the wiring acted up, and many of the lights aren't working. We're getting that fixed though, and we're on our way to, at least physical, illumination.
On Saturday, a small crew of us did a preliminary cleaning of the chapel, just to get it into a condition that we could consistently pray in there and not get covered in saw dust. The protective layers that covered the floor for months were removed that morning, and when each of us saw the chapel free from construction equipment for the first time, we all exclaimed various versions of "WOAH!" and couldn't help but laugh with joy at how amazing it looked. As we dusted and vacuumed and swiffered, we were getting closer and closer to the end of our months of wandering in the wilderness (praying in a tent for a couple of months, and then the chapel for a brief stint, and then our living room for a little more than the last month). We were able to put out our new altar cloths, and set the tetrapod up again. When we finally entered the chapel to pray Great Vespers, it was so good just to get back to the normal routine of donning our monastic chapel garb and venerating the icons (something that we have not been able to do consistently for months). It feels good to be home. 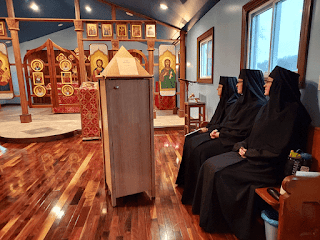 On the other hand, there are still many details to finish and icons to hang and many new things to figure out. It's a wonderful place to pray, and at the same time, as we are praying the services in there, we are confronted by our humanity and have to struggle to be in the moment and not to get caught up in planning out everything that needs to be done or worrying about which lights to turn on at different times. 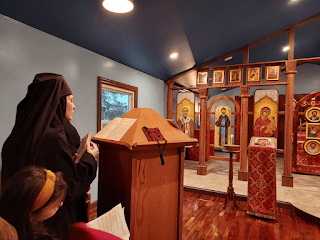 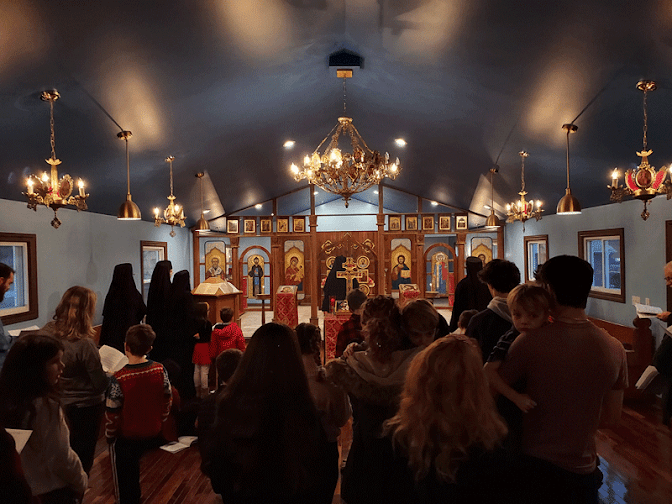 This week, we've settled in even further with a very thorough cleaning (thank you very much to those who came to help us!), and hopefully, Christmas decorations will go up very soon. We've moved in all of the large furniture. And best of all, we'll have the Eucharist reserved in our tabernacle again starting Sunday (something we haven't had in months).

The Feast of the Three Holy Youths:

There's a really wonderful explanation of Hananiah, Azariah, and Mishael's faith in The Winter Pascha by Father Thomas Hopko. We'd like to share it with you, as something to reflect on on this awesome feast.
"Nowadays there are many, even among Christians, who say that to have faith in God is to make claims on the Lord, to be assured of His actions on behalf of the earthly well-being of His people and to count on His deliverance in very human ways. They say that those who do not express their faith in this way are actually weak in faith, doubting the divine promise of the Lord. But such an attitude, sometimes referred to as the 'name it and claim it' approach to faith in God, has nothing in common with the faith of the three holy children.
"The three young men who were confronted by the wicked king of Babylon did not claim that the true God would save them from death in the flames. They surely believed that He could, but they did not insist that He would! Just the contrary. They bore witness to the fact that their God does whatever He wants. It was none of their business what He would or would not do, and it was certainly not the business of the king. They trusted their God in everything. If it was His will to deliver them, they were ready for that. But if it was His will that they should perish in the flames, they were ready for that as well! For they believed that whatever God did, He was still the God in whom they could trust for their ultimate victory. And no matter what God did, they still, under whatever circumstances, would not worship the idol that Nebuchadnezzar had set up. In a word, according to the witness of the three young men, real faith and genuine trust in God makes no deals and no claims. It is completely and totally ready, as was shown supremely in Jesus, to accept whatever the Father wills and provides, knowing that His faithful ones will never be put to shame. Only such faith can change fire into dew and deliver from death."
May we grow in true faith this feast!
Posted by Christ the Bridegroom Monastery at 7:26 PM

Email ThisBlogThis!Share to TwitterShare to FacebookShare to Pinterest
Labels: Renovations