Blessed John Paul II, pray to God for us!

It was a joyful day yesterday as we watched on television the beatification of Pope John Paul II, an extraordinary man we never met but one who we feel that we know and is interceding for us and for our monastery.

When we first began to write our typicon (rule of life) over a year ago, I volunteered to attempt to draft up an outline based on the topics found in other monastic typica that we were looking at, while Sr. Celeste worked on writing some of the sections that we knew we would be including.  I sat down with my computer and prayed.  I decided to pray to Pope John Paul II.  And before I even finished my prayer, a book on the table caught my attention.  It was Pope John Paul II's apostolic letter Orientale Lumen (Light of the East).  This was the apostolic letter that Bishop John had quoted from extensively in his letter announcing and summarizing his vision for a monastery in the Eparchy of Parma.  The words of the pope in Orientale Lumen regarding Eastern monasticism are beautiful, and his call to its revitalization, especially in countries of the diaspora, such as the United States, is clear:


With regard to monasticism, in consideration of its importance in Eastern Christianity, we would like it to flourish once more in the Eastern Catholic Churches, and that support be given to all those who feel called to work for its revitalization. (27)

As I looked over the headings for the outline of this apostolic letter, I realized that each of the topics we needed to address in our typicon would fit under the headings the pope used in his letter, such as "Between Word and Eucharist," "A clear look at self-discovery," "A person in relationship" and "An adoring silence."  As I typed out each heading, the outline for our whole typicon came together easily!

It is through Orientale Lumen and through our own personal prayer to Blessed John Paul II that we feel his intercession and support for us.  And so we are bursting with joy at this big step in the Church's confirmation of his holiness!

Although we only watched the recording of the beatification that my mom had taped for us, we were so excited for our soon-to-be-postulant, Jessie, who was THERE in St. Peter's Square!!!  She seized this opportunity to take an exciting trip before she enters!  She stayed up all night outside the square, with many other pilgrims, so that she could get inside the square in the morning for the beatification.  This is the picture she emailed us from her cell phone.  With 1.5 million pilgrims there, it is amazing that she got such a great spot to witness this historic event. 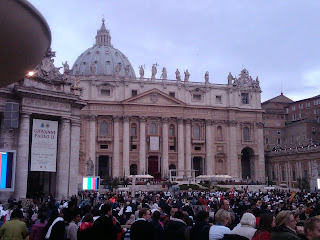 Posted by Mother Cecilia at 9:59 PM