Reflecting on our time in New York

Life is a mystery, and it was providential that Holy Myrrhbearers Monastery in Otego, New York, graciously tended to the needs of Christ the Bridegroom Community. The Myrrhbearers mentioned in the Gospels tended to the needs of Christ from their personal means (Luke 8:2-4), and the nuns of Holy Myrrhbearers Monastery opened their home and hearts and shared their personal means with us. The Myrrhbearers in the Gospels displayed unyielding courage and were not intimidated by any animosity and fear that permeated the atmosphere. With love, they forged forward to approach the tomb of Christ. The nuns of Holy Myrrbearers emulated this courage with the myrrh of love and conviction. Knowing that they could possibly incur some criticism by hosting us, they still forged forward with love and conviction and allowed us to experience a deeper life of Eastern Christian monasticism.

There was an immediate bond between the two communities, and through all the prayer, hard work and oneness of heart that developed between us, each monastery was a gift to the other. At the end of our stay, bittersweet farewells were exchanged with tears and embracing, with both communities knowing they were strengthened in their faith and commitment to Eastern monasticism. The nuns of Christ the Bridegroom Community will always be grateful to the nuns of Holy Myrrhbearers Monastery and we look forward to an ever deepening relationship, to be of one heart and one spirit (Acts 4:32).

Though ecumenism between the Catholic and Orthodox Churches remains in dialogue, there is still much to be undertaken for spiritual understanding and unity, and we hope that the bond that grew between us is one more small step towards this goal. We pray that one day we will be one (John 10:17).

Our typikon confirms this commitment: The nuns of this monastery will pray with their whole beings for the unity of all Christians, “So that they may be One as I and My Father are One” (Jn 17:12).  They will pray especially for understanding and reconciliation between the Eastern and Western Churches.

The role of monasteries as meeting places for the East and West was emphasized by Blessed John Paul II: “In this regard, I hope that monasteries will make a particular effort, precisely because of the unique role played by monastic life within the Churches and because of the many unifying aspects of the monastic experience, and therefore of spiritual awareness, in the East and in the West” (Orientale Lumen 25).

During our time in New York, the word “vigilance” continually resurfaced in my prayer.

Maybe it was because of the goats?

But I learned that vigilance is more than simply persevering in my daily chores (or “obediences”) and even more than showing up for each of the many monastic prayer services throughout the day.  Vigilance is being constantly aware of the presence of Christ and allowing myself to be absorbed in that presence.

Doing my chores with Jesus filled me with peace.  I experienced a great freedom in carrying out the tasks given to me, especially the physical work.  Away from the demands of founding a new monastery, I could simply be a “child”—a novice—and learn how to pray! 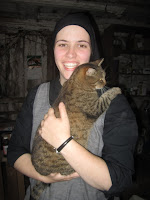 Poverty.  Chastity.  Obedience.  Of the three monastic virtues, I feel like obedience is that last thought about by people outside of a monastery and the most thought about by the nuns in a monastery.  I would say that obedience is the most important virtue, out of which the other two virtues flow.  In order for a nun to truly live out poverty and chastity, she must first obey the call of her Beloved, who is made visible through the mother of her community, so that she may die to her own desires and become totally fulfilled by her Beloved.

During our time in New York, obedience was a recurring theme for my prayer.  In particular, I felt an overwhelming sense of the need to embrace obedience with JOY.  I had a great desire to not only complete the tasks I had been assigned, but to do each task JOYFULLY, as if I were doing each task for my Beloved.  For a city girl like me, this desire often challenged me, especially when it came to shoveling poop in the goat barn!  But there was such a freedom that came with embracing even the humblest of tasks and doing them totally for Jesus.  This freedom came from abandoning my own will and accepting Jesus’ will in everything, trusting that He would give me whatever I needed to do what He asked.

"Obedience is not blind, but deliberately seeks to know God's love and to experience the liberation of freely and continually falling into the arms of the Bridegroom with increasing trust" (Monastic Typikon, Christ the Bridegroom Monastery).
Posted by Mother Cecilia at 8:30 PM