News of Christ the Bridegroom Community reaches the Holy Father! 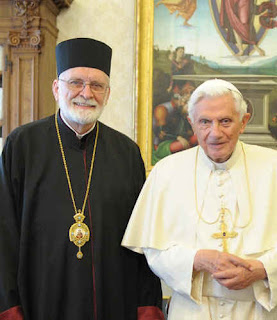 You can probably imagine that we were thrilled to find out that our bishop spoke to the Holy Father, Pope Benedict XVI, about our monastery during the Ad Limina visit of the Eastern Catholic bishops of the United States!  Bishop John recently published his prepared remarks in his "Voice of the Shepherd" column in our eparchy's newspaper, Horizons, and we would like to share them here also.

You may listen to Bishop John's audio recording, or read below:

Sharing with the Holy Father

At the second meeting with Pope Benedict XVI, the Eastern Catholic bishops each presented a snapshot of their respective eparchies. The four leaders of the Byzantine Catholic Church in advance agreed to speak to different topics so to provide more information. Metropolitan William spoke to the history and the revitalization of the various aspects of the Church, Bishop Gerald to evangelization and missions, Father Edward Cimbala to youth ministry and vocations. I spoke to the topics of consecrated life and evangelization through culture. The following is the intervention I intended to present; since I did not want to read it, I strayed from the prepared text.

Your Holiness,
Our Byzantine (Ruthenian) Catholic Church in the United States is committed to the New Evangelization and to instilling the culture of life into and through the various cultures of this country. In the Eparchy of Parma, we call this a Byzantine Catholic culture.
Because the region served by the Eparchy of Parma comprises 12 states perhaps most effected by the economic downturn, there is little opportunity for population growth. It is our duty to re-evangelize in areas where our Church is known and to initiate evangelization to those who may have preset perceptions of our Church. [Note: Due to time limitations, I did not repeat Metropolitan William’s previous presentation of the long establishment of our church and Bishop Gerald’s intervention about developing missions.]
Your Holiness spoke yesterday of the honored place in the Church of those in consecrated life. [Note: Metropolitan William reported of our Church’s monasteries in general terms.] In addition to our long-established monasteries, whose service to the Church is well-appreciated and to whose future the bishops and our membership are committed, we are open to new communities. My own eparchy has extended an invitation to those who would like to live a very eastern monastic style, according to the model set forth by Blessed John Paul in Orientale Lumen. Three women have responded to form the Community of Christ the Bridegroom, additionally inspired by Blessed John Paul’s teaching on celibacy in its relationship to sacramental marriage and also on the intimate relationship between God and man. We hope to follow this with other experiences for men and for women. Because of the eastern monastic style, we have found an opportunity to strengthen our relationship with Orthodox monasteries and hopefully in this way to strengthen the cause of ecumenism.

Posted by Mother Cecilia at 2:48 PM