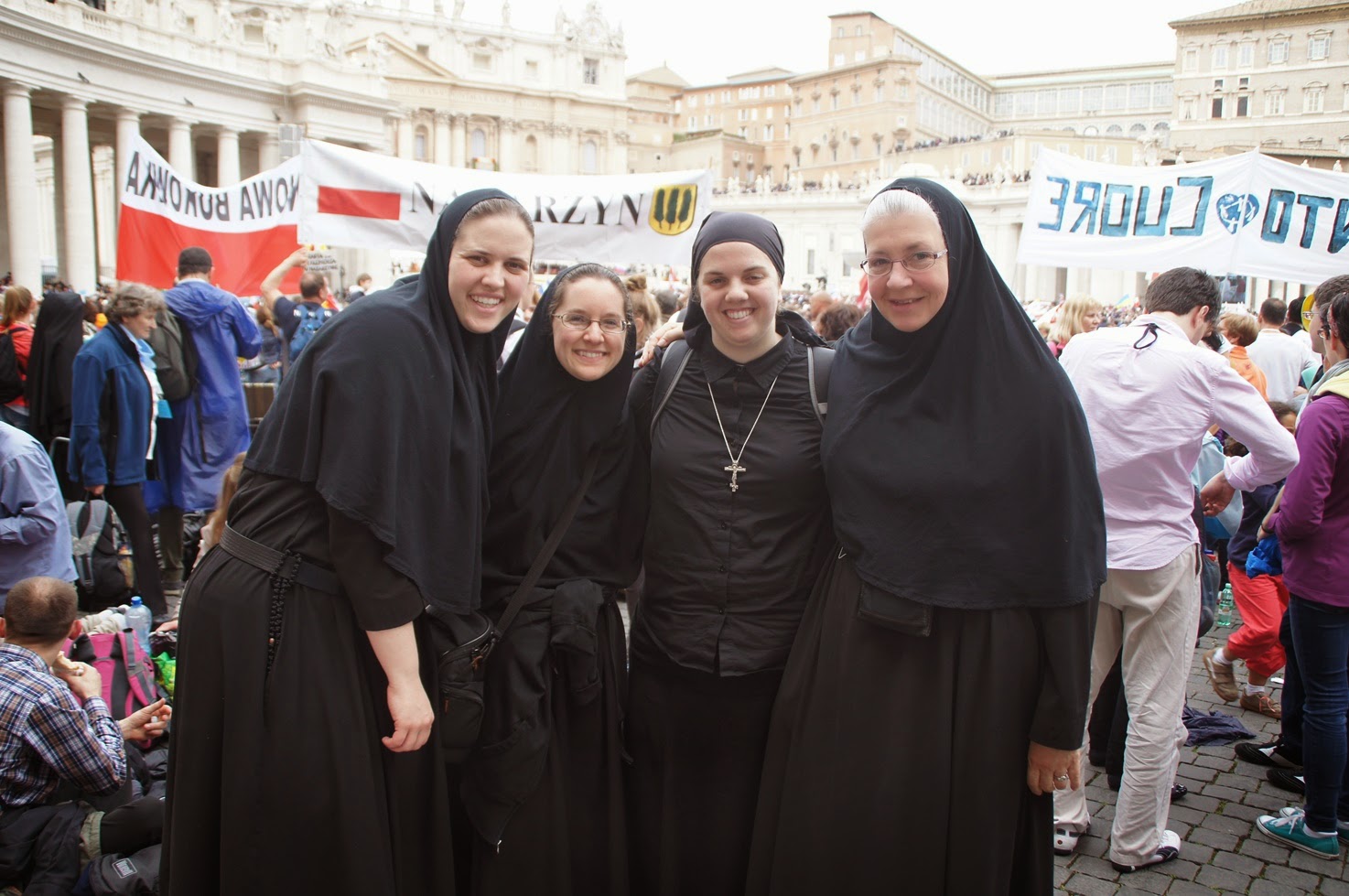 Thanks to a very generous anonymous benefactor, we were all sent to Rome in April to witness the canonization of St. John Paul II and St. John XXIII.  St. John Paul II has played a large role in the founding of our monastery: he inspired its foundation by writing “Orientale Lumen” (“Light of the East”), he has played a role in each of our vocations, and we realized his obvious guidance from heaven while writing our typikon (rule of life).  Those who have visited the monastery also know about our “JPII room”—a small sitting room used most often for our personal meetings with Mother, which is stocked with all our St. John Paul II books, photos and a couple second-class relics.  Once we learned that we would be attending this canonization, we made an effort to get to know St. John XXIII as well.  Some of us read sections of “Journal of a Soul,” the compilation of his personal journals.  We were also pleased to learn about his importance to the Eastern Catholic Churches and his work towards unity with the Orthodox Church.  Making a pilgrimage to this canonization was a distant-dream-come-true and an experience that will always remain in our hearts.  Enjoy these brief personal reflections from each of us. 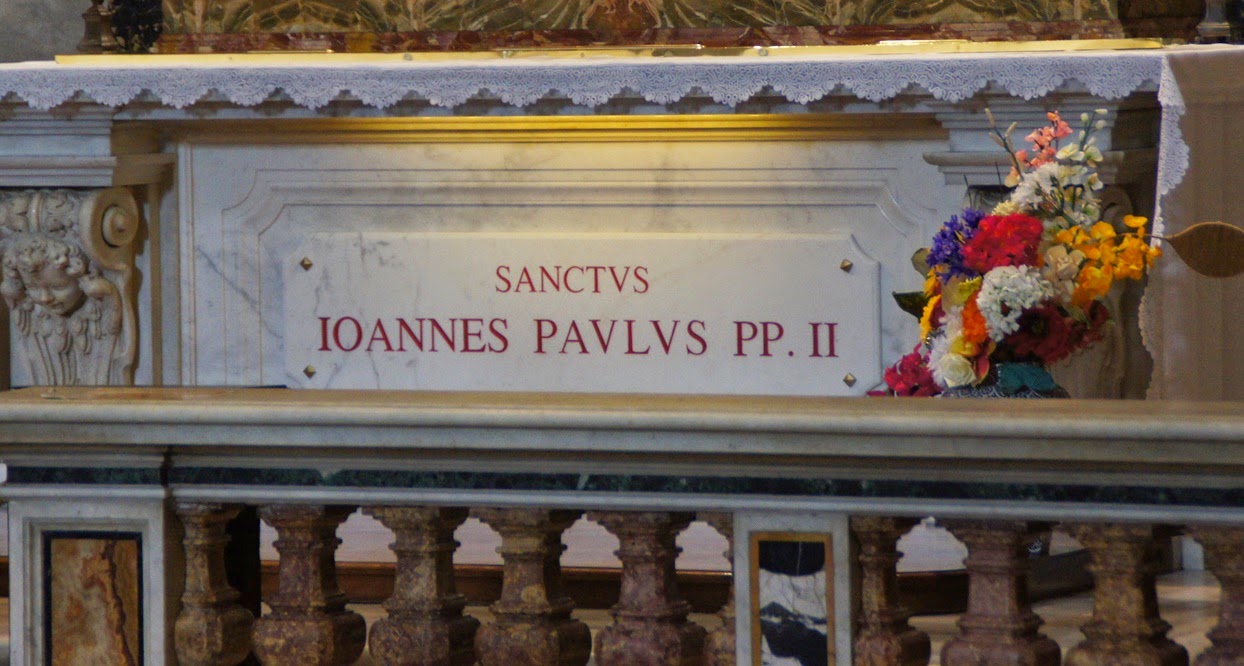 Mother Theodora—”Be not afraid”
“Have no fear of moving into the unknown. Simply step out fearlessly knowing that I am with you, therefore no harm can befall you; all is very, very well.  Do this in complete faith and confidence” (St. John Paul II).  I was 19 when I heard the opening words of Pope John Paul II’s papacy, “Be not afraid.” His love and courage continues to incite me to trust and to move into the unknown.  It was a privilege to be with my sisters in St. Peter’s Square for his canonization and that of John XXIII.  Arriving at the Square took some courage.  We pushed our way into the deep and dense ocean of people that moved us uncontrollably toward our destination.  There were moments when the surge of the crowd literally made it hard to breathe.  We arrived in the Square unscathed and grateful.  My most memorable experience was praying before the tomb of St. John Paul II.  The guards kept moving the endless line of faithful who desired to be near his tomb.  The sisters and I managed to find a little cove outside the ropes in which to stand and pray for his intercession.  We believe the guards tolerated our prayerful presence until a growing number of people joined us.  As I prayed, a flood of fears and reluctancies overwhelmed me and with tears I implored his help.  I then felt his fatherly embrace and heard his encouraging words: “Don’t be afraid.”  With the loving guidance and intercession of St. John Paul II, we continue to step out into the unknown, knowing that through God’s grace all will be very, very well. 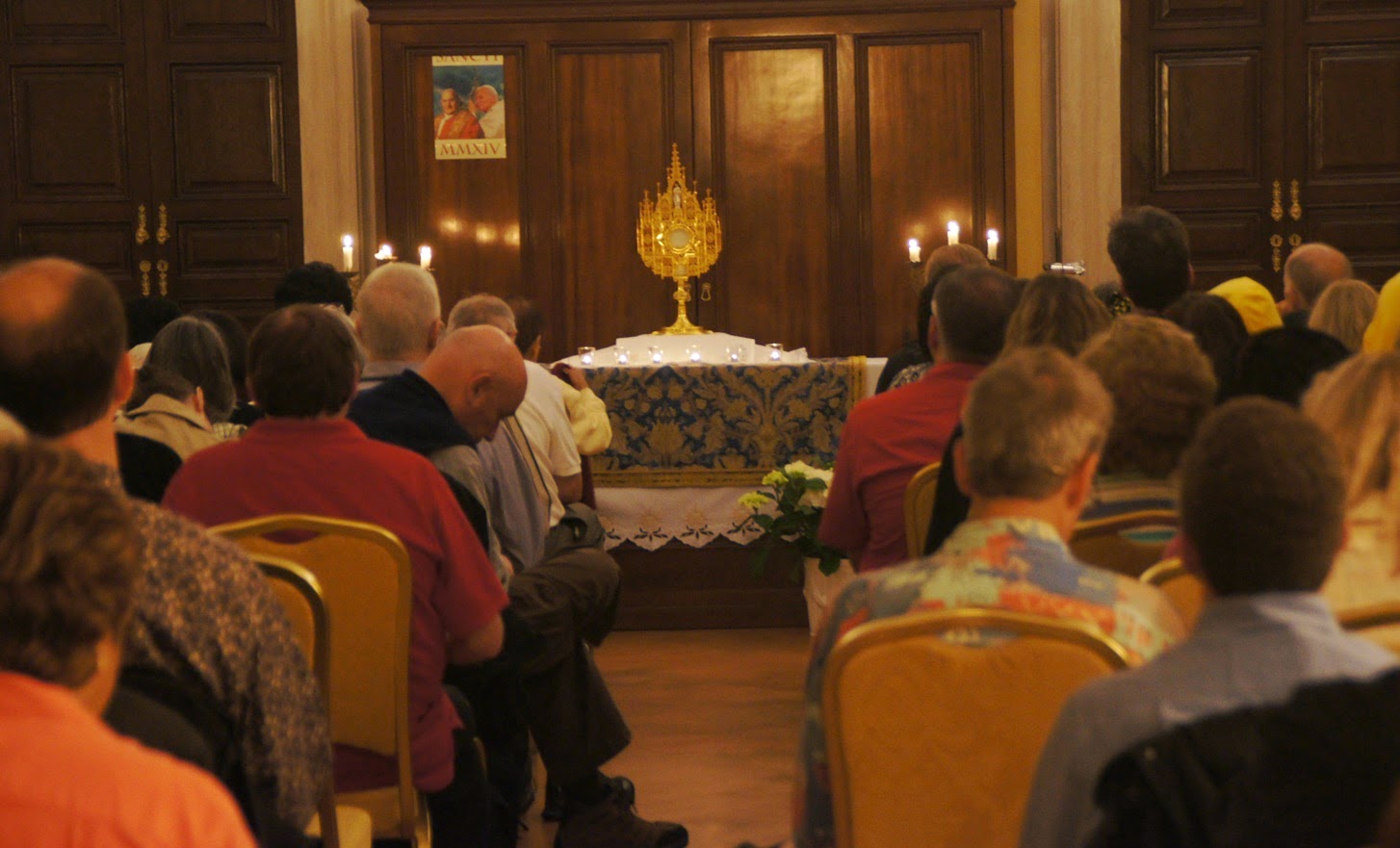 Sr. Cecilia—“In the heart of the Church”
I knew I didn’t want to stand with the crowds out on the street all night in order to get into St. Peter’s Square when it opened.  To be honest, the main reason was that I knew I couldn’t last that many hours without using the restroom!  So I was resigned to being far away from the Square.  However, as soon as we arrived, our tour group leaders told us that they had managed to arrange an amazing opportunity for us: a room large enough for our group to sit in was reserved in a building right on the Via della Conciliazione, just outside St. Peter’s Square.  We would spend the night in prayer, some food would be available for purchase and…we could use the restrooms until the morning!  As soon as the prayer vigil began, I was completely overwhelmed with gratitude and awe at God’s providence.  There I was, right there with Jesus in the Blessed Sacrament, safe inside this building, as hundreds of thousands of people made their way toward this very spot.  The eyes of the world were on this place, yet no one knew I was there in that building in the midst of it.  My monastic vocation—to be praying in the heart of the Church—was renewed.  I became resolved that I wanted my vocation to be for the world, and I realized how intimately close to Jesus this vocation is! 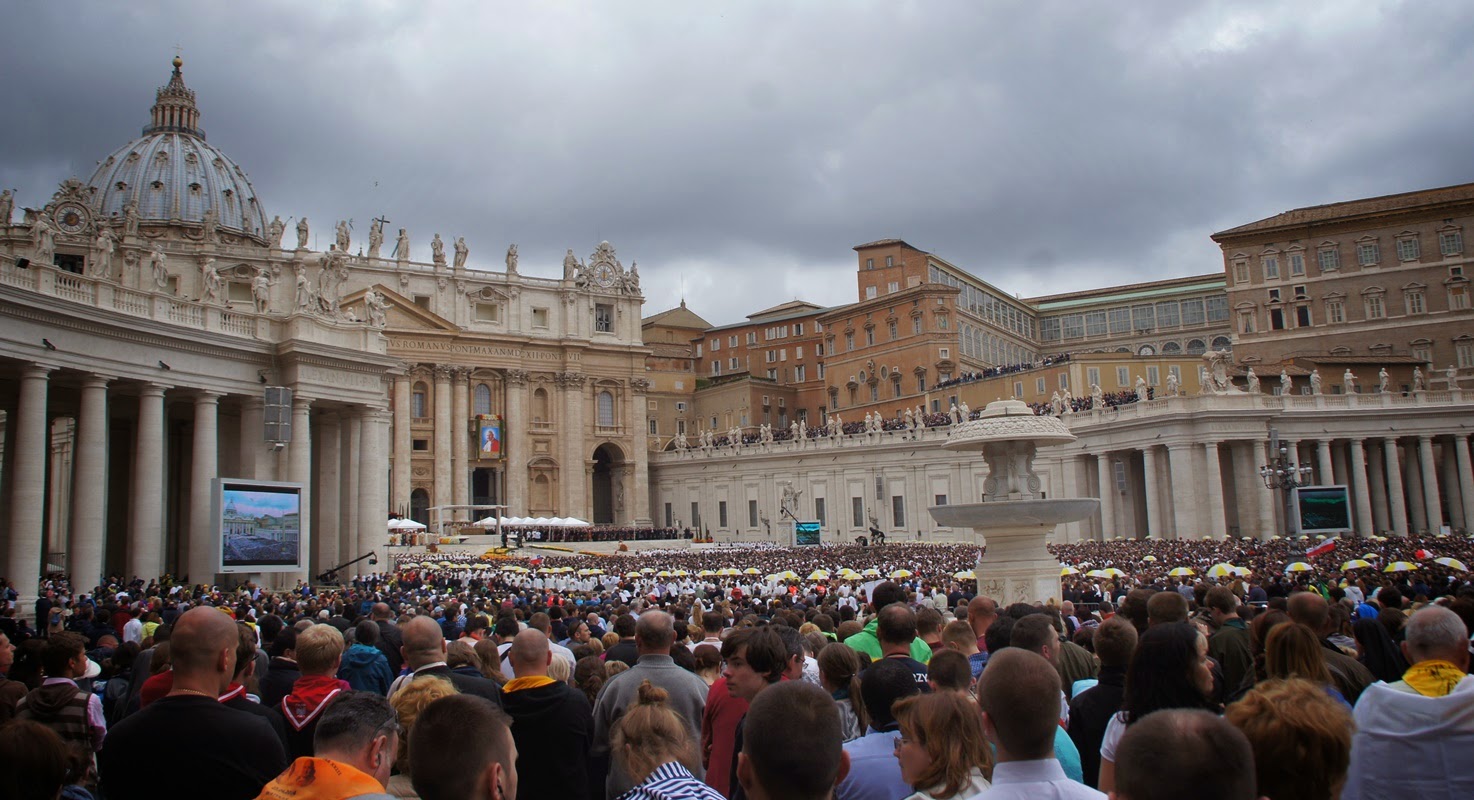 Sr. Gabriella—“God’s abundant mercy”
Having been to St. John Paul II’s beatification, I had a good idea of what we would experience at the canonization.  Last time, I spent the night outside in the streets with all the people waiting to enter the Square – this time, we were blessed with a room to spend the night in away from the crowds – with bathrooms, food and Jesus!  By the time I made it into the Square though, I was beyond exhausted.  I crumpled under my poncho waiting for Mass to begin, barely lifting my head when Pope Francis came in.  The mood was different this time – much more subdued and peaceful.  The almost two full days of being awake was taking its toll on me and I barely made it through Mass.  Since I already received communion at midnight, I felt it wasn’t right for me to receive again because I had not fully participated in Mass.  In God’s providence, a priest walked up 20 feet away from me and had only a few people in line – and somehow I found myself in line to receive Jesus!  The guilt I felt melted away as I tasted the most wonderful Eucharist I have ever received, thinking, “Is this what manna tasted like?!”  I had a profound sense of God’s mercy, so fitting on Divine Mercy Sunday, and Jesus spoke to my heart, reminding me that nothing I do merits my partaking in the Eucharist – it is truly a gift, freely given by God to me! 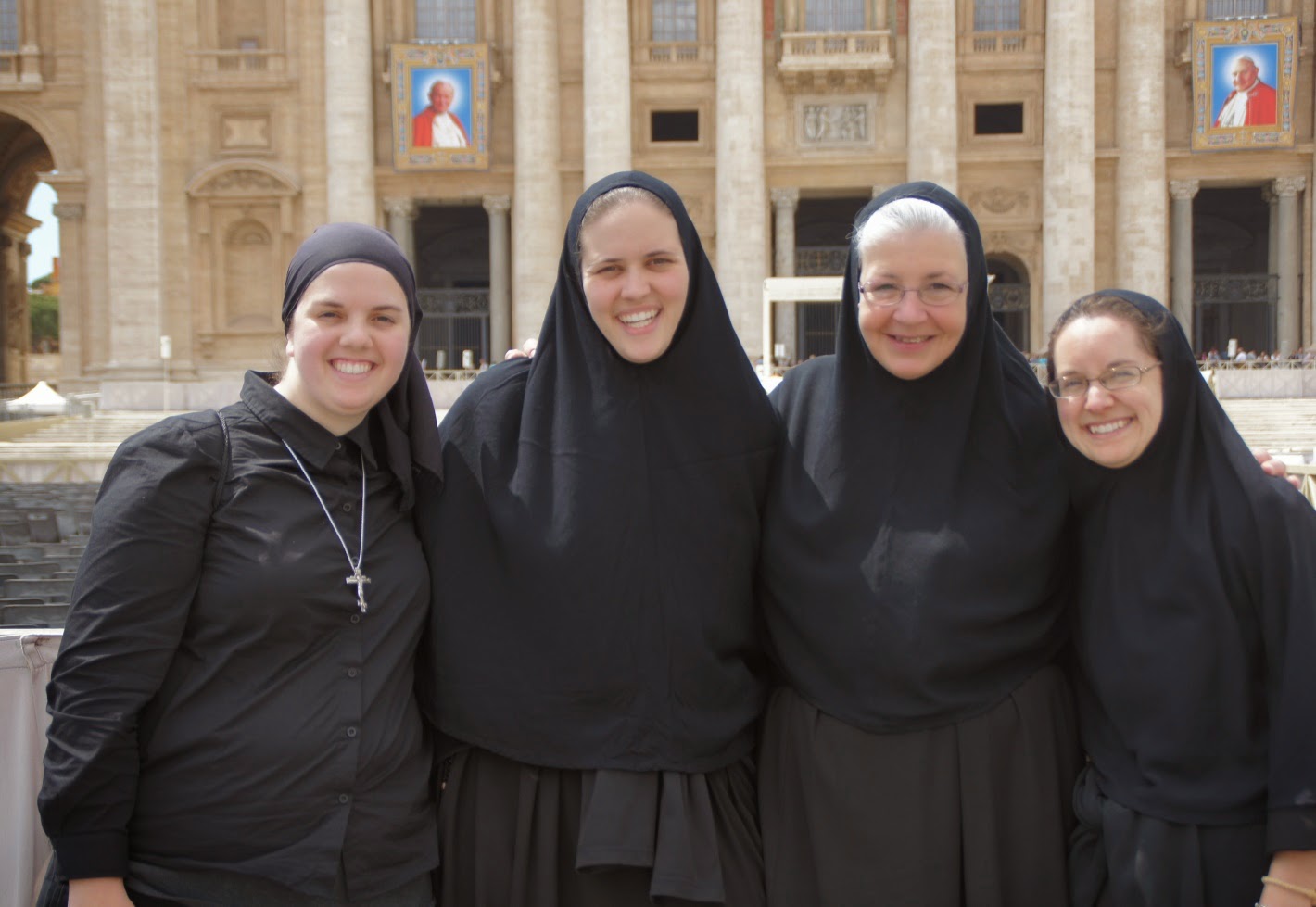 Jacqui—“Being Christ for each other”
The most memorable moment for me was standing in line to get into St. Peter’s Square the morning of the canonization.  Things got tense as the hours passed.  People became tired, hungry, thirsty, claustrophobic, etc.  After a while I became separated from my group.  I began to get nervous because no one around me spoke English.  My back was hurting because my backpack was too heavy, there was no such thing as personal space, and it was difficult to communicate.  Then I realized that this is a pilgrimage and it isn’t supposed to be easy.  I lifted my backpack and began singing the Jesus Prayer to calm down.   Then a kind Italian man behind me said, “May I help you with your bag?”  I immediately thought of what was in my bag that could be stolen.  As I was trying to think, he placed his hand under my bag and lifted it up so the weight wasn’t on my shoulders and back.  He then said, “We stay together.”  Each time the line moved up he would grab my backpack straps and say jokingly, “Left foot, right foot, left foot.”  I realized that these popes who would soon become saints had somehow helped every single person who was in line that day.  We are all called to be that person for the world: a witness to God’s love and action.  I am grateful for the friend who helped me to realize that even in those tense moments we can still be Christ and bring Joy to those around us. 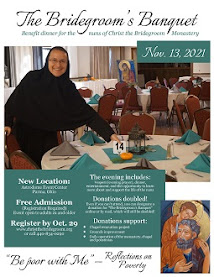