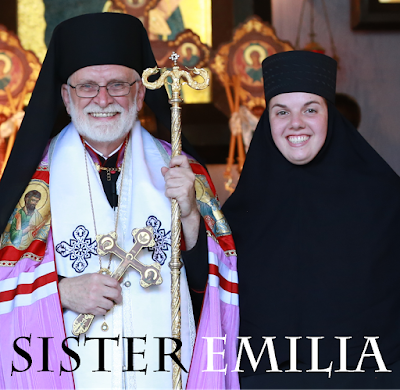 A reflection from Sr. Emilia about her tonsure as a rasophore nun, Sept. 7, 2015

While on my retreat the week before I was tonsured and given the name Sr. Emilia, I realized that the theme of my retreat was “the Father’s gentle love.” As I prayed with Scripture, talked with my retreat director and sat in the presence of God the Father, allowing Him into wounds and areas of my heart I had never opened before, I began to be filled with healing and the awareness of how loved I am. A while before I left for retreat, I had to give Mother Theodora my three name requests and I struggled with deciding which one to choose as the third name. My heart greatly desired Emilia, but it was already my name because it was the name I took for my confirmation. I just couldn’t write it down…but oh, how desperately I loved that name! So I left it up to God. I prayed, “I took that name at confirmation, so if You want me to be Emilia, You have to tell me by inspiring Mother Theodora to choose it without me requesting it!” I wanted the Father to name me. He did!

Since my retreat, the Father has not ceased to show me His particular love for me. So many connections have arisen with the name Emilia. I chose it in eighth grade to honor my mom. She had died just months before I was confirmed, and that was the name she had chosen for my youngest sibling if he had been a girl. Secondly, I chose that name in eighth grade in honor of St. Emilia, the “Mother of Saints,” and also in honor of Pope St. John Paul II’s mom, whose name was Emilia. I love the connection of the name with motherhood, because I love children and a huge part of my heart is full of motherly love for them. The day of my tonsure, I also found out that Bishop John’s mom was also named Amelia. As he said my name for the first time, tears streamed down my face because of all of the ways this name has always been God’s name for me. A huge part of my retreat was about how motherhood will be fulfilled in my heart as a nun, and then I received that name and all of these motherhood connections haven’t ceased coming up. God spoke to my heart in a clear way the day of my tonsure, letting me know that He had chosen me years before and that I was His.

As I sat to write this article, I reflected on Bishop John’s homily from the tonsure. In his homily, he was talking about our tonsure and about motherhood. What he said touched my heart in a very special way: “It is truly a blessing for a bishop to receive two daughters, two spiritual daughters…Someday, I look forward to calling you ‘Mother’ and realizing how marvelous your vocation is to be not a biological mother, but in truth a mother, not circumventing nature, but expanding on it–expanding on your nature to indeed give life; give life to those who come to the monastery, who come to realize the glory of God.” He went on further to express that not every nun who makes the step into novitiate will necessarily conclude that step, but that we (the Church) hope and pray for each sister in formation, that God-willing she will become “Mother” someday.

“Ask the Father to speak your name. The Father can say your name like no one else. When the Resurrected Jesus said, ‘Mary,’ she recognized Him instantly. Listen for His voice. One whisper from the Father can change everything, just like it did for Mary” (Neal Lozano, Abba’s Heart).