The Anointing of Love 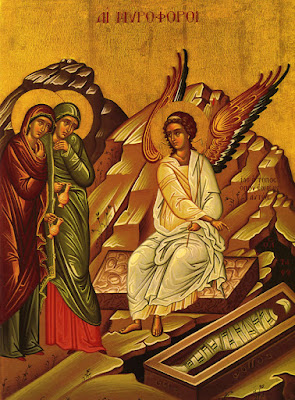 Today on the Sunday of the Myrrh-bearing women I am reflecting back on a grace the Lord worked in my heart a few years ago – a grace which still affects me deeply to this day. I had been sick in bed during Holy Week and feeling frustrated that I was missing all the services and “missing” all my prayer times. At last on Holy Saturday I was well enough to go, at least, to my icon corner in my room, for some quiet, upright prayer (those of you who are sick, know how cherished these upright moments are). But my hands were unsteady, and as I poured oil into my hanging lamp, I accidentally spilled oil all over my icon corner. Instead of having the prayer time that I so desired, I had to spend the next hour trying to clean up the mess. What a waste, I thought.

The next day, after all the Paschal services, my spiritual father unexpectedly stopped by. In an attempt to be funny, I asked him, “I know what Jesus says about the wise virgins who have oil in their lamps and about the unwise virgins who run out, but what about the ones who spill their oil all over their icon corners?” Instead of laughing, he looked at me very seriously and said, “You are the woman who poured her oil over Jesus.” My heart was immediately stirred.

Later the Lord would show me that just as the oil poured over Jesus was not a waste, so too our love is poured out but never wasted. I could see now how often I had been afraid to “waste” my love because I thought it would not be received. Or worse yet, I feared giving my love to those who didn’t “deserve” it. But I was seeing more clearly than ever that I was most called to pour my love out over the seemingly “undeserving,” and that my love would never be wasted. I did not need to worry about controlling the outcomes of this pouring out, but to unite it to Him who would use it in any way that He wished. I realized that as I poured oil over the “least of these” my brethren (see Mt 25:40), I was pouring it over the wounds of Jesus. This love was a consolation to His wounded heart. I had felt so frustrated and inconvenienced by the oil spill because I thought it had taken away my prayer time, not realizing that this oil spill was extremely valuable prayer time.

Posted by Christ the Bridegroom Monastery at 8:00 AM