"When it's more than curiosity": Our first retreat! 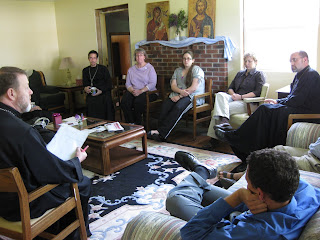 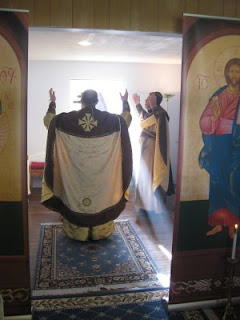 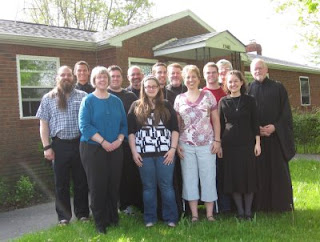 The future monastery itself was still in “renovation mode.” Doors and windows were missing their casings, molding absent at the base of the floors, doors removed from their hinges, a few rooms still in need of a few coats of paint, single light bulbs hanging from the ceilings, and kitchen cabinets removed from their normal stance waiting to be painted. All this and more could have created a distracting environment, especially for a retreat, yet the seemingly unfinished surroundings created a sense of newness and inspired excitement for the potential of monasticism in the Eparchy of Parma.

Thirteen men and women from North Carolina, Washington, DC, Texas, Indiana, Missouri, Pennsylvania and Ohio gathered at the future Christ the Bridegroom Monastery in Burton, Ohio, across from the Shrine of Our Lady of Mariapoch. Everyone seemed to instantaneously bond.

The retreat overflowed with intense prayer and laughter, questions and answers, silence and singing, holy embraces and sharing personal stories and hopes, new and rekindled friendships, a lively camaraderie of good food and taking turns washing the dishes, and above all, a desire to grow closer to God and to know and fulfill His loving will. All of this helped make the vision of Eastern monasticism in the Eparchy of Parma closer to a reality.

During morning prayer, the window in the sanctuary allowed the bright sunlight to pierce through clouds of incense in defined rays of light. Even more exhilarating was the union of spirits and voices during prayer and Divine Liturgy that transformed a yet-to-be completed chapel into a heaven on earth experience.

Fr. Elias O’Brien, O Carm., talked candidly about monasticism and welcomed questions and dialogue from the retreatants. Bishop John Kudrick visited on Saturday, celebrated Vespers, listened to the stories of those gathered, and shared his vision for monasticism in the eparchy as each participant eagerly listened.

The retreat was a blessed event and went smoothly, until one of the men took a shower after the retreat. He unknowingly closed the recently painted door with a missing doorknob. As the participants stood talking in the foyer, knocking was heard on the wall. One of the men recognized that the knocking was an S.O.S. in Morse Code. After much laughter and a little ingenuity, he was rescued from captivity.

The sense and blessing of newness, excitement of a potential monastery and the awesome wonder of God’s will yet to be revealed stirs and grows in the heart of the Eparchy of Parma.
Posted by Christ the Bridegroom Monastery at 1:08 PM

Email ThisBlogThis!Share to TwitterShare to FacebookShare to Pinterest
Labels: retreat