Happy Feast of the Dormition of the Mother of God!  This summer has really been flying, and we haven't had the opportunity to blog as much as we would have liked to.  Here are some brief updates on some of the recent monastery happenings: 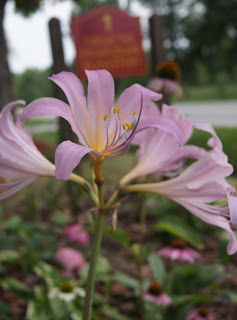 As we mentioned earlier in the summer, Sr. Julie's brother Steven has been working on his Eagle Scout project on our grounds.  He built decorative stone walls at the entrance of the driveway along with landscaping, and he recently finished off the project with the installation of a beautiful sign for our monastery! 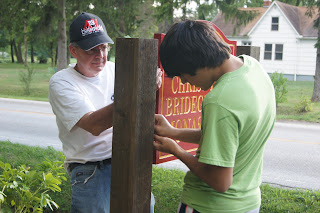 We are thrilled with the outcome of the project!  Our monastery is now visible to the local community and much easier to find!  Thank you Steven! 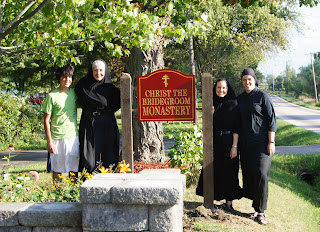 On August 5 we participated in the Fest at the Center for Pastoral Leadership in Wickliffe, Ohio--a large Catholic family festival (with an estimated attendance of 35,000 people!).  We had a blast meeting many people at our table in the vocation tent and playing "Vocation Volleyball" with groups of teens. 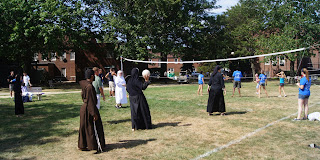 At the Fest we also met two Franciscan Missionaries of the Eternal Word (known for their work with EWTN)--Fr. Mark, host of the show Life on the Rock, and Br. Pio.  The friars filmed a short interview with us!  Maybe the interview will be on Life on the Rock in a few months! 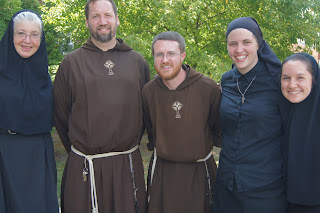 The following day was the feast of the Transfiguration.  It's tradition to bless fruit on this feast.  Here is a photo of our basket of fruits and vegetables, much of which was harvested from our garden. 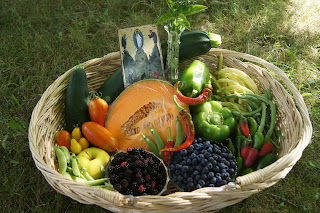 Mother Theodora loves to be in the garden! 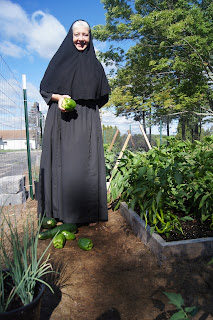 And so do all kinds of little critters...some more friendly than others, like this praying mantis! 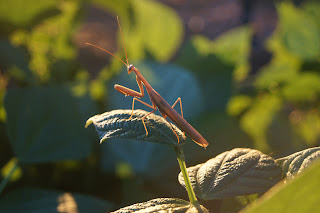 The Eparchy of Parma's annual pilgrimage at the Shrine of Our Lady of Mariapoch (across the street from our monastery) took place this past weekend.  We headed up the teen campout portion of the pilgrimage.  Almost 20 teens enjoyed a weekend of sports and games, talks, prayer, and hanging out by the campfire. 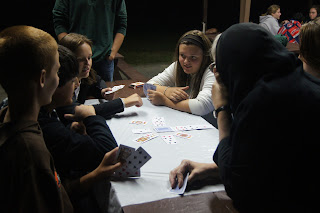 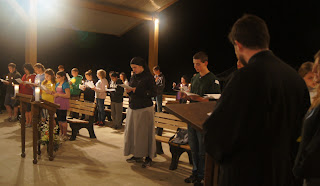 Gregg Stovicek gave a talk to the teens on Saturday night, along with Seminarian Ryan Mann (below) on Sunday morning, on the topic of "faith," in preparation for the "Year of Faith" (beginning in October) which Pope Benedict has called for. 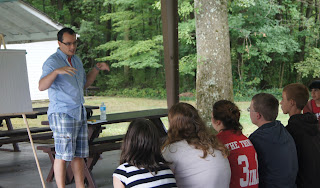 The pilgrimage was an experience full of grace for us and for the teens and pilgrims.  It was very encouraging and enjoyable to pray and hang out with our Eparchy of Parma family!

Posted by Mother Cecilia at 7:45 PM No comments:

Did you miss our talk? You're in luck.

Were you unable to make it to our talk about the monastic life on Thursday?  That's ok...thanks to Fr. Miron's speedy technology skills, the video is already online!  The video is broken down into a few segments: Mother Theodora speaking about "what is monasticism?," Sr. Julie about "the development of monasticism," Jessie about "why does the world need monasticism?" and some questions and answers.  We hope you learn something! 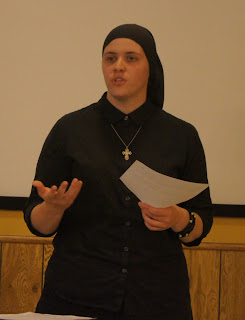 Posted by Mother Cecilia at 9:08 PM No comments: