God be with you, Jacqui!

Jacqui McNeill (formerly known as Sister Emilia) has decided to leave the monastery in order to have the opportunity to discern the possibility of marriage.  Her decision has brought her peace of heart and mind and we share in her peace as well.  Please join us in offering loving prayer and support to Jacqui as she continues to discern God’s will in her life. God bless you, Jacqui! 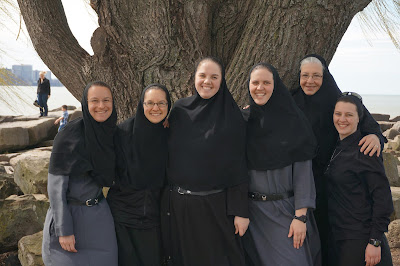 “I want to thank all the family and friends of the monastery for their love and prayerful support in my discernment. As I continue to ask God to lead me, I ask for your continued prayers.
Know you continue to be held close in prayer.”
~Jacqui
Posted by Christ the Bridegroom Monastery at 12:12 PM 9 comments: 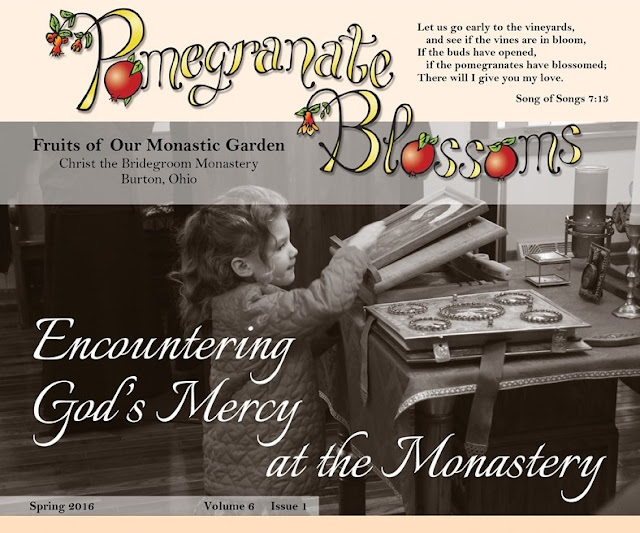 We hope you enjoy our "Year of Mercy" issue of Pomegrante Blossoms!

This issue features two beautiful reflections, from a seminarian and a priest, about their experiences of encountering God's mercy at the monastery. Also, read Mother's updates about our renovations and needs, enjoy photos from Holy Week and Pascha, mark your calendars for some upcoming events, and read about our recent discernment retreat.

It may take a minute to load the large file. Thanks for your patience and for your continued prayers and support!
Posted by Christ the Bridegroom Monastery at 9:19 PM No comments:

Happy Pentecost, and thank you to our work day volunteers!

A great group of volunteers joined us yesterday for our spring work day. The rain let up long enough in the afternoon to accomplish some outdoor projects, and we also attacked some indoor cleaning and moving. Some volunteers also helped with projects across the street at the Shrine of Our Lady of Mariapoch. There was plenty of mud for everyone to get sufficiently dirty!

In the evening, we prayed Vespers for the Feast of Pentecost and enjoyed dinner indoors! Thank you to all who gave of their time, energy, and love yesterday, and we send our love to all on this glorious Feast of Pentecost!

"In the days of old, pride brought confusion to the tongues of the builders of the Tower of Babel, but now the diversity of tongues enlightened the minds and gave knowledge for the glory of God. Then, God punished the impious for their sin; now, Christ enlightened fishermen through His Spirit. Then, confusion of tongues was for the sake of punishment; now, there was variety so that voices could be joined in harmony for the salvation of our souls" (Vespers Aposticha Doxastikon).

Posted by Christ the Bridegroom Monastery at 1:36 PM 1 comment: 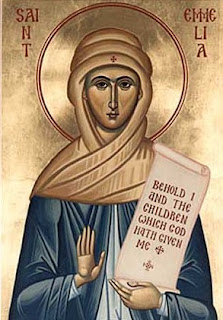 Among the various saints we commemorate today, one is St. Emilia, the mother of ten children, five of whom are canonized saints.  Below is a reflection from our Sr. Emilia on the occasion of her feast day and Mother's Day.

Eight months ago, when I was given the name “Emilia” at my tonsure, I was in awe of the Lord’s reminder that He had named me as His many years ago, “Before I formed you in the womb I knew you, and before you were born I consecrated you...” (Jeremiah 1:5). Mother Theodora chose the name Emilia because of the connection with motherhood and my love for children.  Accordingly, at my confirmation (10 years ago) and again at my tonsure; the words of Isaiah 62:2,5 were fulfilled, “You shall be called by a new name which the mouth of the Lord shall give…as a bridegroom rejoices over his bride, so shall your God rejoice over you.” The Lord continues to speak to my heart, showing me how I am called to love in a maternal manner; showing me His great desire to love me, as my Father.  I have loved hearing and responding to the voice of Abba calling out to me, His little girl, “Emilia!” Never have I felt so loved.

After my tonsure, I looked at the calendar to see on which day my feast fell this year and whether it was in a fasting period or not (important, right?!). I was happy to see that it fell on a non-fast day. Then I looked again and laughed at God’s work…of course my first feast day as “Sr. Emilia” would fall on Mother’s Day! He truly does give us the desires of our hearts.

This feast day, falling on Mother’s Day, is perfect because the reason I am named Emilia is due to motherhood. I chose that name for my confirmation in 8th grade in honor of my mom and the mother of St. John Paul II. Then, I was given that name again 10 years later as a byzantine monastic, at my tonsure as a rasophore nun. St. Emilia has been to me a mother who consoled me in the loss of my mom, who guided me in my love for children as a nanny, and now in my discernment of whether I am called to biological or spiritual motherhood.
I celebrate today the joy of being a spiritual mother to many children. I am especially grateful to God for the children who hold a special place in my heart: my youngest siblings, as well as Matthew, Abigail, Andrew, Maria and Daeclyn Emmelia Rose. I am thankful for the mothers that God placed in my life, especially Our Lady and my mother and godmother, who have gone to be with the Lord, as well as those mothers who God gave me in place of them, to lead me in my walk closer to union with the Bridegroom: Mother Theodora, Aunt Shirley and my step-mom, Lisa.  These children and women are to me the people who lead me to be a better “mother.” Who are the women in your life who are being honored today? What children has the Lord given you? Let us thank the Lord today for all women who accept the call to be "Mom" and pray for those who desire to be biological mothers, but are unable to be.

Posted by Christ the Bridegroom Monastery at 12:43 PM 1 comment: 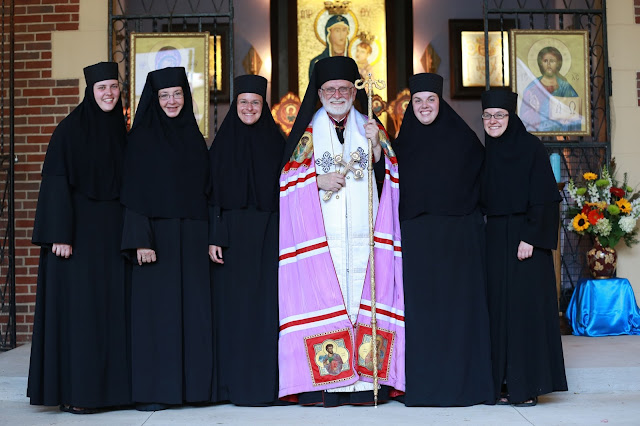 PARMA, Ohio — Pope Francis has accepted the resignation of Bishop John M. Kudrick of the Byzantine Catholic Eparchy of Parma and has named Archbishop William C. Skurla of Pittsburgh as apostolic administrator.

​Further, Pope Francis has accepted the resignation of Bishop Gerald N. Dino of the Byzantine Catholic Holy Protection of Mary Eparchy of Phoenix and appointed Bishop John S. Pazak C.S.s.R., of the Eparchy of Sts. Cyril and Methodius, based in Toronto, Canada as Bishop of Phoenix, while remaining administrator of the Toronto Eparchy.

The clergy and faithful of the Eparchy of Parma are saddened by the unexpected news of Bishop Kudrick’s resignation. He was appreciated as a prayerful leader, who loved the Church and the Eastern Catholic Tradition. Among his accomplishments, he showed great pastoral vision in trying to restore Eastern monasticism by establishing a women’s monastery in the eparchy. He also created a new pastoral plan, aimed at invigorating parishes and encouraging efforts for evangelization. 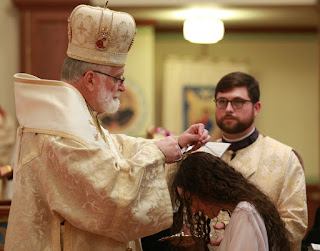 Bishop Kudrick was ordained the fourth bishop of Parma in 2002. Born in Lloydell, Pa., in 1947, he was ordained a priest in 1975 for the Third Order Regular of St. Francis (Franciscan Friars, T.O.R.). He was incardinated in the Byzantine Catholic Eparchy of Pittsburgh in 1987, serving in Pennsylvania until his episcopal appointment to Parma. He was 68 at the time of his resignation.

The Byzantine Catholic Eparchy of Parma includes 12 states in the American Midwest: Illinois, Indiana, Iowa, Kansas, Michigan, Minnesota, Missouri, Nebraska, North Dakota, South Dakota, Ohio and Wisconsin. It was established in 1969. Today, it provides ministry and pastoral care to some 8,000 faithful in about 30 parishes and missions. 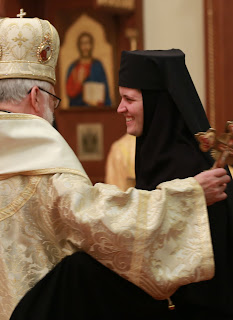 
Letter from Bishop John to the Eparchy of Parma:

In 2002, I was humbled that the Church considered me God-chosen for the office of Bishop of Parma. It has become apparent that now in 2016 the Eparchy of Parma needs leadership that I cannot provide. The Holy Father in his paternal concern for the Eparchy and for myself has allowed me to retire with the understanding that I may be asked to accept another office in the future. Until the next bishop is chosen, Metropolitan William Skurla will serve as apostolic administrator.

I thank all who collaborated with me and I assure you of my prayer, for which I’ll now have more time. I hope to offer assistance where I am able. I pray our ongoing relationship will be marked especially with mercy and forgiveness.

I look forward to joining the Eparchy in offering our support to my successor. In the last 14 years I experienced God’s presence and wonderful cooperation with Him. I am certain that will continue to ensure our deepening of discipleship and sacramental practice, an accepting of our individual vocations, and the strengthening of our parishes.

In Christ our Hope,
+Bishop John

Posted by Christ the Bridegroom Monastery at 4:19 PM No comments: