Inspired by Matthew’s account of the Transfiguration, especially the line, “And when they lifted up their eyes, they saw no one but Jesus only” (Mt 17:8), one of the nuns in our monastery wrote the following poem after our pilgrimage to the Holy Land. We pray that the words can help deepen your own intimacy with our Bridegroom! 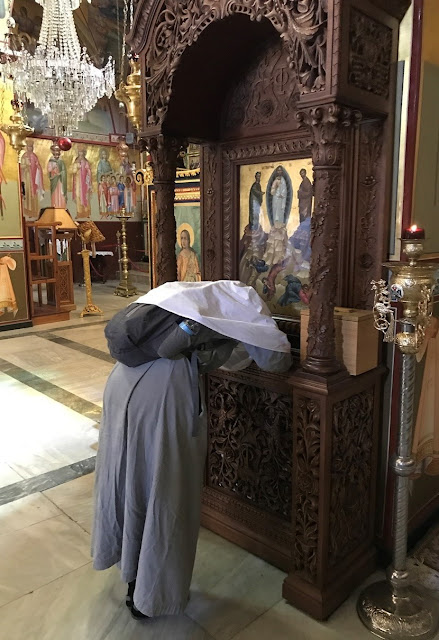 It is on Tabor that I first fell in love.
There did I behold my Lover, radiant and ruddy.
And when I fall to my face in shame,
unworthy to bask in those rays,
You touch my chin.
I lift my gaze.
And I can see nobody but You.

It is a love so effortless,
when I let it be so.
I need not even think of where is Your love.
When I cry, it is in Gethsemane.
When I laugh, it is in Cana.
There is no part of my life outside of our love.

It is a love meant for the world to see.
It cannot be kept secret.
And so I left the mountain,
because the mountain is not my love.
My Love is You, and You have asked
to make my heart a Mt. Tabor,
so others may fall in love.

Posted by Christ the Bridegroom Monastery at 1:31 PM 2 comments: 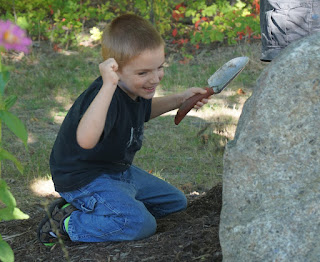 Join us for a day of outdoor and indoor work projects, prayer, food and fun at the monastery on Saturday, September 23.  Volunteers of all ages and abilities are welcome!  The day begins at 10 a.m., includes lunch, and closes with vespers at 5 p.m. followed by a cookout.  Come at whatever time you are available, and bring a side dish to share if you can.  The monastery is located at 17485 Mumford Rd. Burton, Ohio.  Please RSVP* by Tuesday, September 19, to 440-834-0290 or christthebridegroom@gmail.com, so that the appropriate amount of food can be prepared.

*Please RSVP with:
1. The number of adults (include teens) and the number of kids (12 and under)
2. Will you be here for lunch or dinner or both?
3. The dish you plan to bring

Posted by Christ the Bridegroom Monastery at 3:55 PM No comments:

Save the Date for the Bridegroom's Banquet 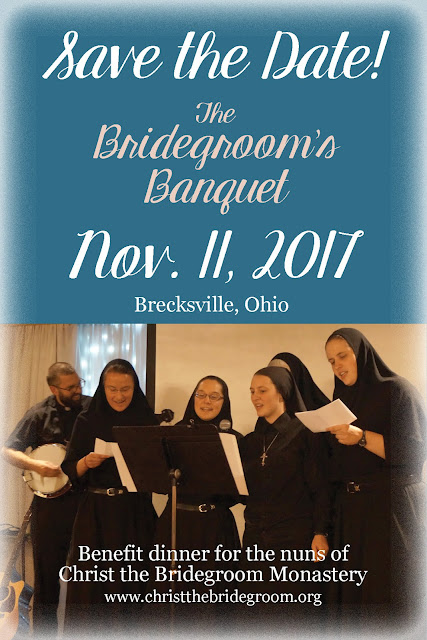 Save the date for our benefit dinner, Saturday, November 11, 2017, at St. Joseph Byzantine Catholic Church in Brecksville, Ohio. The evening includes Vespers (evening prayer), dinner, entertainment (comedy by Fr. Ryan Mann and Fr. Jacob Bearer), and the opportunity to learn more about us and support our life of prayer and hospitality.

Your donation, whether at the event or designated ahead of time, will be doubled by generous matching donors!

The event is free, but registration is required. Registration will open in a few weeks. Please keep an eye out for more information!
Posted by Christ the Bridegroom Monastery at 3:00 PM No comments:

Email ThisBlogThis!Share to TwitterShare to FacebookShare to Pinterest
Labels: fundraising

To descend to be raised up 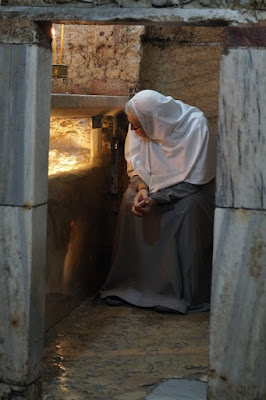 I was especially moved by the phrase in bold in this first stichera at Vespers:

"O what a wonder! The Source of Life Itself is placed in a tomb; the grave becomes a ladder to heaven. Rejoice, Gethsemane, holy chamber of the Theotokos. As for us, O faithful, let us cry out with Gabriel, the prince of angels: Rejoice, O woman full of grace, the Lord is with you!--the Lord, who because of you bestows great mercy on our souls." 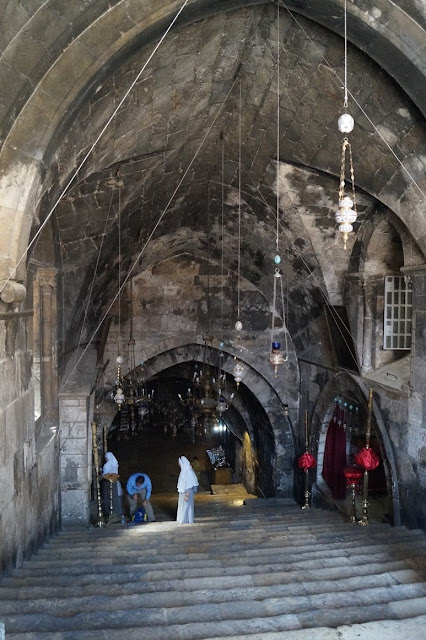 Why did it strike me? Take a look at the second photo to the right. These are the many steps descending into the church which contains the tomb of the Mother of God. (The people in the photo are only about half-way down the steps.) This, to me, is an image of Mary's humility. "For He has looked with favor upon the lowliness of His handmaiden..." (Lk 1:48a). In life, and in death, Mary embraces the littleness and poverty of her humanity, and God raises her up. "From this day forward, all generations will call me blessed" (Lk 1:48b).

Mary is an example to us of the daily dying to self which "becomes a ladder to heaven." When we descend the many steps down into the poverty within us and surrender our lives into the hands of God, He then raises us up to a new life of joy and freedom, ultimately in heaven, but even now in the Kingdom that has already begun.

Mother Cecilia
Posted by Christ the Bridegroom Monastery at 2:58 PM No comments: 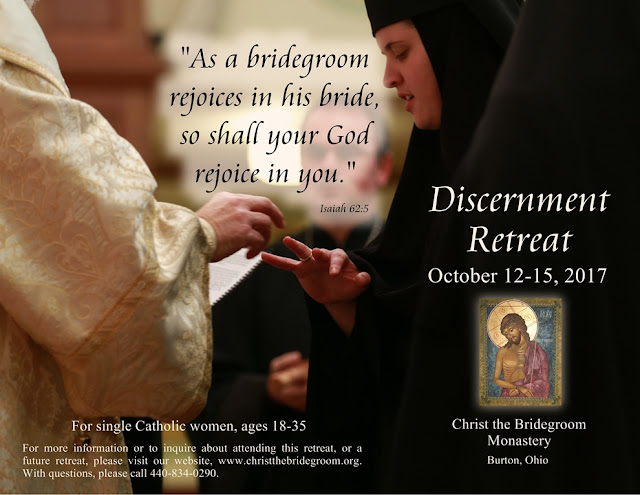 "As a bridegroom rejoices in his bride, so shall your God rejoice in you” (Is 62:5). Single Catholic women, ages 18-35, who would like to take a weekend to pray about a possible vocation to the monastic or religious life, are invited to inquire about attending the upcoming discernment retreat at Christ the Bridegroom Monastery, Thurs., Oct. 12 – Sun., Oct. 15, 2017. Experience the life of prayer at the monastery, listen to talks on prayer and discernment, make use of the opportunity to get to know the nuns, and receive healing through the Mystery of Holy Repentance (Confession). For the schedule and more information, please see the retreat brochure. If you are interested in this retreat, or a future retreat or discernment opportunity, fill out the online Vocation Inquiry Form. Please fill out the form by Sept. 29 for this retreat. Space is limited. Mother Theodora will call you to talk about availability. With questions, call 440-834-0290 or email christthebridegroom@gmail.com.
Posted by Christ the Bridegroom Monastery at 8:24 PM No comments:

Transformed into the image of His Love

By the grace of God, a benefactor sponsored us to make a pilgrimage to the Holy Land, July 6-18. In the coming months, we will share reflections and photos from this life-changing experience. Here is the first of our reflections, written by Mother Gabriella for the occasion of the Feast of the Transfiguration.

During our recent trip to the Holy Land, I had the privilege of going so many places I never even dreamed of going.  Even though I read the itinerary ahead of time, every moment seemed to be a surprise from God!

One of the feasts while we were there was for St. Veronica (July 12), who has been part of my journey for many years.  Tradition tells us that she was the woman with the flow of blood for 12 years that Jesus healed, which was a very important image for me during my discernment of monastic life and even now.  On the day of her feast, we began by riding to the top of Mount Tabor to an Orthodox monastery which has a piece of the rock where Christ was transfigured.  I didn’t have a particular excitement about the trip up the mountain – be it the jet lag, lack of sleep, or generally being overwhelmed by all the holy places we had been – but as soon as we got there, many of my sisters were very moved by the experience, so I thought, maybe I should get excited to be here!

Each of the nuns was blessed to receive an icon of the Transfiguration to touch to the stone where Jesus was transfigured and as I touched my icon to the stone, I prayed, “I want to be transfigured, so my life will show the change you have worked in my heart.” And I heard immediately from the Father, “You are transfigured,” in a very knowing voice, so I trusted He would let me know what that meant.

Fast forward to the end of the day back in Jerusalem, one of my sisters had expressed interest in going to the sixth station to visit the chapel dedicated to St. Veronica in honor of her feast, so we headed out through the Old City to find it.  We arrived after a several minute walk and were blessed to find the church still open!  So we went in and were able to sing her tropar (hymn) in the chapel.  We also had a deacon friend with us who chanted all three gospels of the woman with the flow of blood and we ended with some quiet time to pray.  As I sat there praying, I meditated on the gospels we had just read and imagined myself as the tassel on Christ’s garment.  I don’t normally do imaginary prayer, but since that is where the Spirit led, that is where I followed.  As the scene played out in my mind, I could feel the power of Christ move through me to St. Veronica as she was healed and I was struck with a connection between Christ and St. Veronica I had not seen before – the importance of cloth and blood.  I saw how St. Veronica came to Jesus confident that He would heal her flow of blood, if she but touch the tassel of His garment.  And I saw Jesus, approaching St. Veronica during His passion, also bleeding and in need of comfort, seeking St. Veronica to wipe His flow of blood away with her veil.

This scene moved me to also desire to comfort Him, but I had no cloth to wipe His face.  I told Jesus this desire and He spoke to my heart that He had already given me something to use – my habit.  I gave Him myself already and He gave me this cloth, which He invisibly imprints His face upon for all to see everywhere I go.  In accepting my dependence and need, in laying down my life and receiving from Him, I had something to offer back to Him – the very clothes on my back, to comfort Him.  In comforting and receiving that imprint, I became transfigured – I became the very image of Him in the world – an icon of His love.  I became an image of heaven on earth – of what our life in heaven will look like, in union with Him forever.  So I prayed that His image would become more present in me, on me, through me, making me a living transfiguration – which was exactly what He said had already happened that very morning!

So as we encounter the Transfiguration anew today, let us all ask Jesus how we can offer ourselves to Him, to be further transformed into the image of His love for the world to see.

Posted by Christ the Bridegroom Monastery at 8:00 AM No comments: 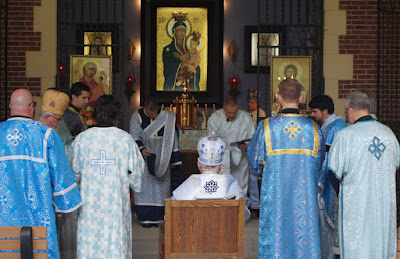 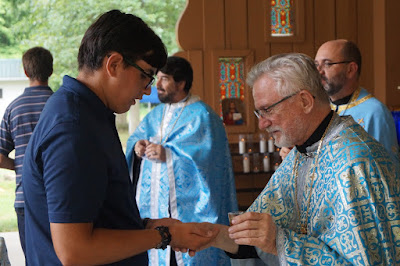 Join us for the annual pilgrimage to the Shrine of Our Lady of Mariapoch, 17486 Mumford Rd., Burton, Ohio (across the street from the monastery), on Saturday, August 12 - Sunday, August 13. Visit the shrine's website for the schedule and more information (scroll down on the homepage).

We will be cantoring some of the services, as well as coordinating the teen and family talk and campfire on Saturday night and the teen activity on Sunday afternoon. Unlike the past few years, we are not chaperoning a teen campout, but teens are encouraged to ask their families to camp out with them on the grounds!

Our new Apostolic Administrator, Bishop Milan Lach, will give the talk on Sunday afternoon at 1:15 p.m. and will celebrate the Divine Liturgy at 3:30 p.m. The new replica of the icon of Our Lady of Mariapoch, which was painted in Mariapoch, Hungary, will be installed at the shrine. Come and get to know Bishop Milan and pray and spend time with others from many different parishes in the eparchy. All are welcome!
Posted by Christ the Bridegroom Monastery at 2:46 PM 1 comment: