Join us for the Great Canon of St. Andrew of Crete, March 15 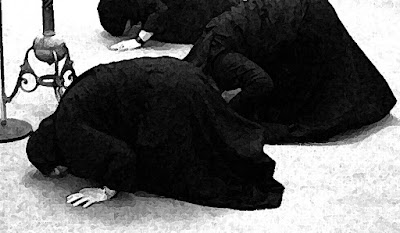 Join us in a deeply-moving, once-a-year Lenten experience on Thursday, March 15, at the Cathedral of St. John the Baptist, 1900 Carlton Rd., Parma, Ohio.  The Great Canon of St. Andrew of Crete takes us on a journey through the entire Bible, placing us in the shoes of the penitents of the Old and New Testaments and teaching us from their examples.  The hundreds of prostrations unite our body and soul as we repent of our sins and experience God’s mercy.  We will also listen to the life of St. Mary of Egypt and venerate her relic.  The opportunity for the Mystery of Holy Repentance (Confession) will also be available.  A simple Lenten meal will be served 5:00-5:45 p.m., and the Canon will begin at 6:00 p.m.  All are invited to come for part or all of the Canon, even if you are not physically able to participate in the prostrations.  The duration of the Canon is approximately 3.5 hours.  If you plan to come for dinner, please RSVP by Friday, March 9, to 440-834-0290 or christthebridegroom@gmail.com.
Posted by Christ the Bridegroom Monastery at 7:41 PM No comments:

Sr. Petra was tonsured as a rasophore nun on Feb. 1. Enjoy these photos from her tonsure.

Before a dokimos is tonsured, she asks the Lord to place in her heart three names that she will submit to the Hegumena (superior of the monastery). The Hegumena then asks the Holy Spirit for guidance and clarity in choosing one of these names (or another) which the dokimos will receive at her tonsure as a sign of her new life consecrated to Christ the Bridegroom. In our monastery, the dokimos submits to the Hegumena not only the three names, but also a written explanation about each of them. Below are the thoughts that Sr. Petra submitted about St. Peter. 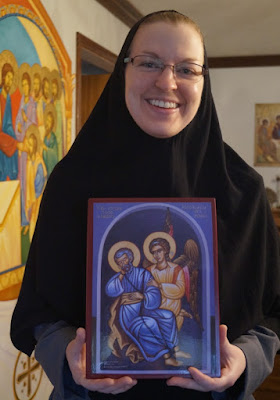 During the past few months, St. Peter has been very present with me in prayer, teaching me Christ's faithfulness in the face of my human weaknesses and failures.  As I've touched my own poverty more deeply, I could easily recoil at my unworthiness, could be tempted to flee the One Whom I love so poorly.  But Peter gives me courage to remain under the merciful gaze of Jesus, confident of His love for me in the midst of my fear and failure.

I understand Peter's fear of the Cross, his initial rejection of the Lord's revelation of the cost of obedience to the will of the Father.  When Jesus revealed to His Apostles that He must suffer and die in Jerusalem (Mt. 16), Peter burst out, "God forbid, Lord!  This shall never happen to you!"  He wanted to make Jesus avoid suffering, to escape the Cross!  How logical this seems.  Yet Jesus rebuked Peter, "Get behind me, Satan!  You are a hindrance to me; for you are not on the side of God, but of men."  In other words, the urge to escape suffering is not of God.  The Christian life is not about avoiding suffering; rather, it is about the reality that Love transforms suffering so that it becomes both redemptive and a  means of union.  Thus, Jesus continued, "If any man would come after me, let him deny himself and take up his cross and follow Me.  For whoever loses his life for My sake will find it."  On a natural level, I respond to suffering, to the Cross, the same way as Peter.  Yet something—perhaps witnessing the Resurrection of Jesus, perhaps being embraced by His gaze of love after his denial and abandonment of Him, perhaps receiving the outpouring of the Holy Spirit (or, likely, all of the above)—converted Peter's heart so that he would later have the courage to climb up on his own cross and pour out his blood, in imitation of His Beloved.  Here, in between the experience of my own fear and weakness, and my desire to respond to Jesus' love in kind, Peter comes alongside me and intercedes that my heart, too, would be changed, infused with supernatural love and trust.

After the Resurrection, after he had denied and abandoned his Friend and Master, Jesus met His disciples on the shore of the Sea of Galilee and called Peter apart, asking him three times if he loved Him.  Keenly aware of his unfaithful denial, Peter neither tried to defensively excuse himself, nor did he count himself out of Christ's merciful Love in a spirit of self-condemnation (as had Judas).  Rather, he referred his love to Jesus' knowledge, laying open his poor heart to Christ's omniscient gaze:  "Lord,  You know everything—You know  I love You."  He also knows everything about me:  He knows my sins, my past, my secret selfishness, the shabbiness of my love, my weakness, my wandering heart that is always looking for a resting place among mere creatures.  He knows my fear, my reluctance to suffer, the ways I've tried to avoid His Cross.  And yet, He also knows that I love Him, so He continually renews His call on my life to follow Him.  "I know whom I have chosen," Jesus said at the Last Supper, fully cognizant of what would follow (Jn 13:18).  Jesus knows me, too, the woman He has chosen.  I can trust that I can't disillusion Him so that He removes His love from me.  He knows me, loves me, calls me—calls me by name!

Peter's faith in the Resurrection taught him to embrace suffering, especially the suffering of violence and persecution, even unto martyrdom.  The man who ran from the Cross would later run to the Cross!  He writes of this hope in his first epistle:  "We have been born anew to a living hope through the resurrection of Jesus Christ from the dead...In this you rejoice, though now for a little while you may have to suffer various trials...For one is approved if, mindful of God, he endures pain while suffering unjustly...For to this you have been called, because Christ also suffered for you, leaving you an example, that you should follow in His steps...By His wounds you have been healed...Do not return evil for evil."

This fisherman from Galilee was chosen to be the chief shepherd of Christ's Church on earth; his successors continue to guard the Faith built on the rock of Peter.  He is a tremendous intercessor for the unity of the Body of Christ, having heard Jesus' high priestly prayer "that they may be one, even as You, Father, are in Me, and I in You" (Jn 17:21).

Posted by Christ the Bridegroom Monastery at 1:03 PM 1 comment:

Email ThisBlogThis!Share to TwitterShare to FacebookShare to Pinterest
Labels: tonsure

"To heal the great wounds of our soul"

Today in the Byzantine Church is the first day of the Great Fast (Lent). Below is the ambon prayer from the Divine Liturgy on Cheesefare Sunday (the day before the fast begins). It is a beautiful prayer asking for God's grace as we begin this time of time of intensified prayer, fasting and almsgiving. 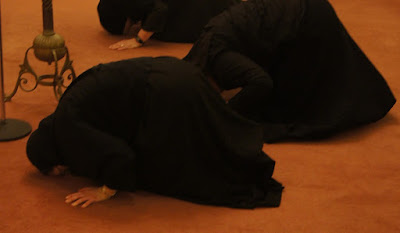 "We thank you, O Lord Jesus Christ, that you have brought us to this opportune time of fasting towards salvation, for in this short time you have arranged to heal the great wounds of our soul, and to bring about the rejection of our many sins. Good Master, we pray you, remove from us any pharisaical hypocrisy in fasting, and banish all false sorrow. Drive from us all pride in our self-denial and moderation in deeds, words or thoughts. Fill us with light and the truth which you have taught. Strengthen us in the struggle against passions and in the war against sin. By alienation from passions prepare us to follow you by our fasting. Show us victory over the devil, that we may partake of your death and resurrection, and rejoice in the joy which you have prepared for those who hunger and thirst for righteousness. For you are the God of mercy, and glory is yours, together with the Father and the Son and your all-holy, good and life-creating Spirit, now and ever and forever. Amen."
Posted by Christ the Bridegroom Monastery at 2:24 PM 2 comments:

As we shared in our last post, the newest member of our community was tonsured as a rasophore nun on Feb. 1. This video includes the blessing of the habit, the giving of Sr. Petra's new name, her tonsure and a beautiful homily by Bishop Milan.


“Jesus, again today, through this liturgical celebration, invites you also, and again repeats, ‘Follow Me. Follow Me in your life! Are you prepared to follow me with all? With all sacrifice? Again, with all renouncement of this world? Or no?’ Each of us needs to give the answer to Jesus Christ, as today Sr. Petra gave this answer here.”

Posted by Christ the Bridegroom Monastery at 1:04 PM No comments:

On Feb. 1, during Vespers for the feast of the Meeting of Our Lord with Simeon and Anna, dokimos (postulant) Sara Lynn Gafford was tonsured as a rasophore ("robe-bearer") nun, receiving the habit and a new name: Sr. Petra. She is named after the apostle Peter. She was tonsured (four small segments of her hair were cut, in the sign of the cross) by Bishop Milan Lach, our apostolic administrator. Our founding bishop and bishop emeritus of our eparchy, Bishop John Kudrick, was also present. The tonsure took place at St. Stephen Byzantine Catholic Church in Euclid, Ohio.

We look forward to sharing more about the tonsure in the near future, including photos and Sr. Petra's reflection on her name. Please keep Sr. Petra in your prayers as she grows in the monastic life and continues her discernment (3-4 years leading to life profession).
Posted by Christ the Bridegroom Monastery at 3:25 PM 1 comment: