"It's great to give everything" 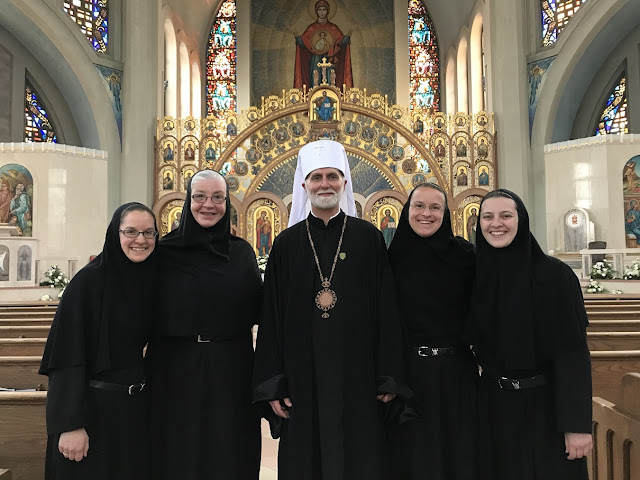 Last week, four of us took a trip to Philadelphia to attend the enthronement of the new leader of the Ukrainian Catholic Church in the United States, Metropolitan Borys. We also participated in a day-long gathering for clergy and religious. It was a very beautiful and powerful experience. We were moved by the huge number of bishops and other clergy present, by the beautiful singing, and by the wonderful people we met--including a few monastics from Europe, from whom we received wisdom and advice. Here is a link to more photos.

We were especially moved by the remarks of Metropolitan Borys at the end of the enthronement liturgy. His words gave us so much hope in the midst of a Church that is struggling. His words, as well as the words of Patriarch Sviatoslav during a conference for the clergy and religious, empowered us to persevere in striving to be holy and to "give everything." Metropolitan Borys surprised us by singling out Mother Iliana as an example. His words were so powerful that we want to share them with all of you. Please consider watching this video clip of his remarks. Also, here is a link to a video of the enthronement liturgy, starting with the Gospel. If you are unable to watch the video clip, below is a portion of his remarks, including a translation of a part of the remarks that was given in Ukrainian.

"We've seen our Church that was supposed to be dead. A totalitarian regime was trying to kill it; it had limitless resources, it had a nuclear arsenal. And this Church is alive. There are bishops here--Vladyka Ihor, for example, the metropolitan of Lviv--who became a priest in the underground. What hope did he have that things could change? Not too much, right?

Dear brothers and sisters, we, as children of this Church, do not have the right not to be witnesses. You don't have this right. If you have tasted how good the Lord is, go forward and witness. Help the Church to be renewed, as His Beatitude (Patriarch Sviatoslav) encouraged us. It just takes a few people who believe profoundly and are ready to give everything. It's great to give everything."
Posted by Christ the Bridegroom Monastery at 8:09 PM