"To hold the fire in your hand": St. Barlaam of Antioch 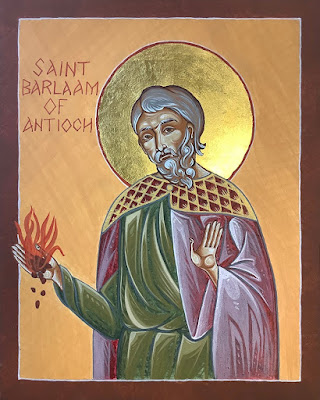 My first year in the monastery, when I heard the story of St. Barlaam of Antioch read in our chapel before Vespers, I was captivated—tears came to my eyes, and a sense of exultation lifted my heart.  I re-read his story after the service, and began asking for his prayers from that day. Every year since then, I’m more deeply moved by this martyr and father in the Faith. And I’m realizing that, like me, most people have never heard of him.

His story begins in a fashion typical of the early martyrs; he stands out only for his age: Barlaam an old man, in his 90s. During the persecution of the Emperor Diocletian in 304, he was dragged before the governor and urged to cast incense before the pagan gods of the empire. Of course, he refused, so his captors devised a way to mock the elder: They placed burning coals and grains of incense in his hand, certain he would drop the embers, thereby allowing them to deride him by saying that he did, after all, cast incense before the gods. Instead, Barlaam responded with the stillness of faith: holding the burning coals in his hand, he stood unyielding as his hand burned away. Some accounts say he then rendered his spirit to the Lord, others that the governor, enraged, killed him. Either way, this martyr’s love was tried by fire and proved worthy.

St. Barlaam has a special significance for me in my vocation. He is an emblem of the faith and trust required to remain in the purifying fire of monastic life. He offers me an image of celibate love: to hold the fire in your hand in faithfulness, and to refuse to drop the fire under the pressure of our society. But, most of all, a line from a homily of St. John Chrysostom pierces my heart with the meaning of this saint’s sacrifice: He “was both the altar and the priest and the sacrifice.”  We—all of us, not only monastics—are called to offer as priests the sacrifice of our very selves on the altar of our bodies.

Telling my spiritual father about this saint one day last year, I burst out, “It’s impossible—impossible! Nobody could do that! Nobody! Yet—he did!!!” By the power of the Holy Spirit burning in him, St. Barlaam scorned the enemy’s fire and entrusted himself, body and soul, to the Lover of Mankind. May each of us allow the same Spirit to consume us, that we, too, may be radiant torches testifying to the luminous reality of Divine Love.

Note on this icon: This past summer, my friend Mother Pelahia worked with me on this icon of St. Barlaam of Antioch.

Posted by Christ the Bridegroom Monastery at 12:00 AM

Email ThisBlogThis!Share to TwitterShare to FacebookShare to Pinterest
Labels: saints