Christ is Born! Glorify Him! 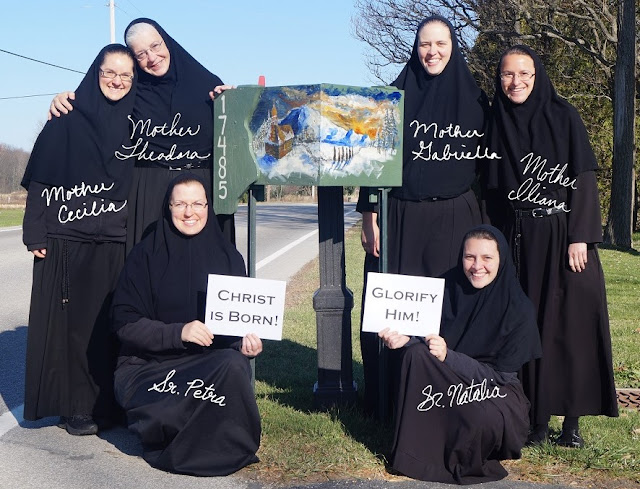 "When the Creator saw the one whom He had created with his own hands perishing, He lowered the heavens and came down; He took upon himself human nature from the most holy and pure Virgin, truly becoming flesh; for this reason, we glorify Him" (Matins for the Feast of the Nativity, Canon, Ode 1).

Have a blessed feast of the Nativity of Our Lord!

The nuns of Christ the Bridegroom Monastery

Posted by Christ the Bridegroom Monastery at 7:00 PM No comments:

Email ThisBlogThis!Share to TwitterShare to FacebookShare to Pinterest
Labels: Christmas

The Way to the Father's House

A reflection and poem by Sr. Petra for the Sunday before Christmas:

This Sunday of the Ancestors of the Lord is given us to remind us that God deigns--nay, delights--to work through His creatures: so much so, that He chose to become a Man, complete with a lineage of flawed human forebearers. We should pay particular attention to the genealogy St. Matthew presents to us: it includes people with far-from-pristine pasts, stories riddled with suffering and sin. Tamar, wronged by her father-in-law Judah, connived to ensnare him in incest. Rahab (the mother of Boaz) was a harlot before she hid the Israelite spies who came to her city. Ruth was a Moabitess, a foreigner from an idolatrous people, yet she was the grandmother of Jesse and the great-grandmother of King David. Solomon, of course, was a fruit of the relationship between David and Bathsheba, which began in adultery and murder. In fact, some of these ancestors were so wicked that their names were blotted out of the Hebrew genealogies. Thus, Joram was not actually the father of Uzziah as Matthew writes in verse 8, but his great, great grandfather. Because Joram had married one of the idolatrous daughters of Jezebel, his family was under a curse! But the reality is that God chose to come from just such as these--and He still chooses to enter the world through our feeble humanity. Undaunted and undeterred by our sins and failures, He mercifully gathers them into His loving hands and works our good, and the salvation of the world. My spiritual father told me recently, "God loves, loves, LOVES to work through secondary causes. He would rather work through you than alone." This is the wonder of the Incarnation. This is the startling truth of our Faith: Despites our falls and failings, The Trinity works through us to open the way to the Father's House.

Wedded to one wicked

who was slain by the Lord,

given to his brother

who denied what was yours,

you returned a widow

to your father’s house.

You waited for the third

son of Judah to come

by giving you a son.

But the years stole your hope

in your father’s house.

Since you were forsaken

you laid aside mourning,

his lustful seed to draw.

Draped in a harlot’s veil,

you left your father’s house.

By the road at Enaim

you sat and you waited.

He paid to come to you,

his urge to be sated.

By deceit you became

After three months had passed,

it was told:  Judah learned

that you were with child.

He judged, “Let her be burned.”

Pregnant, you were led out

of your father’s house.

You sent him the tokens

he’d given you as pledge

of pay for using you

as you lay on the edge

of the road to Timnah,

beyond your father’s house.

his sinful deeds with shame.

The life that you carried

At last, you bore two sons

in their father’s house.

you stretched forth grasping hands

to seize your rightful fruit

and establish your land.

Yet through you came the way

to the Father’s House.

Posted by Christ the Bridegroom Monastery at 10:10 PM 1 comment:

Email ThisBlogThis!Share to TwitterShare to FacebookShare to Pinterest
Labels: poetry

Livestreamed Services for the Nativity 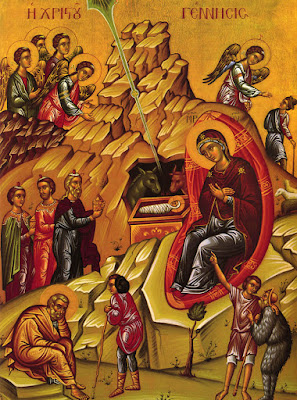 In preparation for, and in celebration of, the Feast of the Nativity of Our Lord, we will live stream the following services from our chapel. If your parish offers any of these services, we encourage you to pray with your parish community in person, if possible. To pray with us, visit our Facebook page and click on the currently-streaming video. You can also view the videos afterward. Links for the text for some of the services are provided in the schedule below. God bless you during these final days of preparation for the coming of Our Lord!

Posted by Christ the Bridegroom Monastery at 10:34 PM No comments:

Email ThisBlogThis!Share to TwitterShare to FacebookShare to Pinterest
Labels: prayer

From the Monastery Library: "Why Christmas Trees Aren't Perfect" 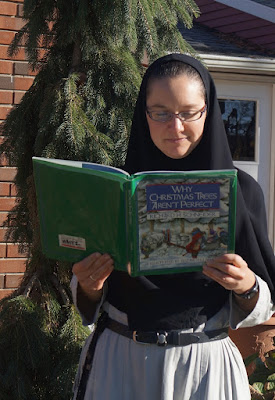 I discovered this delightful children’s book, by Richard H. Schneider, at my parents’ house last year when I was visiting. The first time I read it, I cried. Then, I brought it back to the monastery to read to my sisters, and I cried again! The story takes place in “a small kingdom far beyond the Carpathian Mountains” where a young tree named Small Pine is striving to continue growing perfectly so that it might be chosen some day to be the Christmas tree in the great hall of the queen. But what happens that winter to Small Pine will forever change the way that evergreen trees grow. And, it might change your heart too!
Posted by Christ the Bridegroom Monastery at 8:24 PM No comments: