A song co-written by Mother Cecilia: "Rebuild My Church" 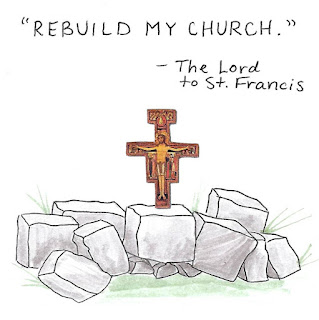 Mother Cecilia shares about a song she co-wrote which was recently released online:

I am excited to share with you this song which I co-wrote with a spiritual brother of mine, Deacon Joe Menkhaus, a transitional deacon for the Diocese of Cleveland (meaning, he is in his final period of formation for the priesthood). I never imagined I would do such a thing, but it’s been such a joyful and life-giving process. I’m really happy to share it with you, and I hope it blesses you. Here is the story behind the song:

About two years ago, Deacon Joe and I were talking about my poetry, and I asked him, “If I wrote a rhyming poem, could you turn it into a song?” (I knew that he had written some songs.) He replied, “Sure!” So, I decided that I wanted to write lyrics that would be meaningful to both of us. Around that same time, while Deacon Joe was on his internship assignment at a parish, one of the priests there was arrested for illegal activity, and this priest has since been sentenced to life in prison. Scandal in the Church has touched both my life and Deacon Joe’s life in multiple ways. As a Byzantine Catholic, I also find myself suffering in the middle of the schism in the Church between Catholics and Orthodox. So, one day while praying during one of my monthly poustinia retreats, I was suddenly inspired and wrote these lyrics.

Deacon Joe found that he wasn’t able to turn my lyrics into a song (because this wasn't the usual way he wrote music), so later on I sang for him a melody that came to me. Then he was able to do something with it, and he adapted the lyrics and the melody and made it into something quite nice! We again set it aside, but recently he was inspired to record it so that we could share it with others and encourage others in their prayer and struggles in the midst of continuing scandals throughout the Church. In the recording, Deacon Joe sings and plays the guitar, his brother Max plays the piano (and did a lot of the work mixing the song), and I sing harmony (which is another miracle, because I’ve almost never sung harmony!).

My hope is that people will listen to the song in a spirit of prayer, open to the ways that the Holy Spirit may be calling them to pray and fast for the Church, and most importantly, to be love in the midst of suffering and division.

Anyone can listen to the song for free on YouTube. It is also available on Spotify and Apple Music. Feel free to share with others who may be blessed by it!

Posted by Christ the Bridegroom Monastery at 9:40 PM