In the Shadow of the Cross, at the Tomb 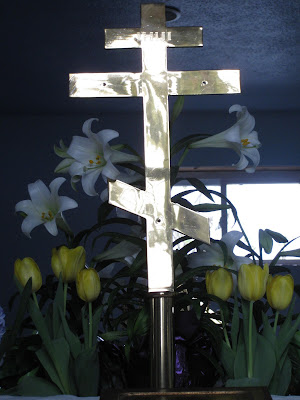 I went to visit a family member in the hospital this week, and while I was there, we were chatting about the weather and I commented that the sun was shining when I came in.  “The sun is shining?  It looks dark out to me!” was the reply.  So I opened the curtain, but part of the hospital building was blocking the sun from shining directly outside the window.  “Still looks dark to me.”  No matter what I said or how I reassured that the sun was indeed shining, since it could not be seen from the angle we were looking, it was not believed.

I was struck by this exchange because so often in my own spiritual life I experience moments of "darkness," where I am not able to "see the sun shining."  All I can see from my vantage point is the shadow, the lack of sunshine – the absence of the presence of God.  In those moments when God seems far away, hidden or completely absent, I must rely in faith on those around me who assure me that He is in fact still there, still "shining." I also must rely on His word, because He said He is always there: “Trust in the Lord with all your heart, and do not rely on your own insight” (Proverbs 3:5).

I often times feel as if God’s felt absence is a sign of displeasure or disfavor, and I am led to ask "What did I do wrong?  How can I fix it so You will come back?"  In that moment, I can echo the words of the Bride in the Song of Songs: “I sought him whom my soul loves, I sought him but I did not find him” (3:1).

I was reminded in a talk I heard this past weekend that His absence is not because I have done something wrong – but it is a means to draw me deeper.  The priest speaking was married and was relating his own distress when he and his beloved bride were forced to be apart for a number of months because of issues out their control. “I was a mess,” he confessed.  “I began to see her in the people walking down the street.  I thought of her when I heard our favorite songs on the radio or saw our favorite food in the grocery store.  It was in her absence that her presence was made known.”  As he spoke those final words, my heart was pierced.  How often do I endure God’s absence, rather than embrace it and allow it to produce THAT kind of longing in my heart?  If only His absence could be transformed into seeing Him in everyone and everything, instead of lamenting that I can’t "feel" Him! Oh, how much I have to learn!


So as we commemorate Our Lord's Passion, I offer this little reflection as something to ponder while we sit in the shadow of the Cross, while the Sun is darkened and His felt presence leaves us, and we await Him at the tomb.  May we cling to the Cross, embracing His absence as a sign of the great work He is doing for our salvation, full of expectant hope in the Resurrection to come on Pascha.

-Mother Gabriella
Posted by Christ the Bridegroom Monastery at 3:00 PM

Email ThisBlogThis!Share to TwitterShare to FacebookShare to Pinterest
Labels: Cross