On this feast of the Exaltation of the Cross, we are full of joy to announce the life profession of Sr. Natalia and Sr. Petra as stavrophore ("cross-bearer") nuns on Sunday, September 26! After several years of discernment as rasophore ("robe-bearer") nuns, these two nuns are answering the call of the Bridegroom to commit themselves to Him in the monastic life for the rest of their lives, taking up their crosses and following Him in all of the sorrows and joys of this prophetic vocation. Please pray for them in these final days of preparation!

Though capacity restrictions in the church prevent us from opening the Divine Liturgy to the public, you are invited to join by watching the life stream of the service on our Facebook page, beginning at 1:00 p.m. Eastern. You do not need to have a Facebook account to view. The video will also still be available afterward for viewing. 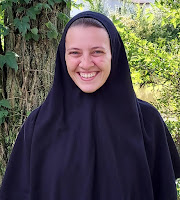 Sister Natalia entered the monastery in 2015 and has been a rasophore nun since 2016. As a military kid, Sister Natalia grew up in a variety of places from Cuba to Denver.  She earned her B.S. in Engineering Physics from Colorado School of Mines.  Her route to monasticism passed through urban missions both with A Simple House of Sts. Francis and Alphonsus and teaching high school math.  Though her role in the monastery is wide, she spends much of her time coordinating all the guest logistics involving our poustinia retreat houses, ensuring visitors are received with hospitality.  Sister Natalia and Father Michael O’Loughlin co-host the podcast “What God is Not” that focuses on Byzantine Catholicism and Mystery. 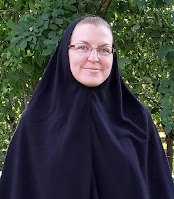 Sister Petra entered the monastery on the Encounter of our Lord in the Temple in 2017, and was tonsured on the same feast in 2018.  She earned a B. A. in History from Indiana Wesleyan University, and an M.A. in History from John Carroll University.  Prior to her entrance, she worked as the secretary of St. Joseph Catholic Church in Circleville, Ohio.  Raised Protestant, her path to the Byzantine Rite led her through the Roman Rite: she was received into the Catholic Church at the Easter Vigil in 2009.  Among her varied monastic obediences, she assists in coordinating poustinia retreats and serves as librarian.  She enjoys reading, writing, hiking, and biking.

The Meaning of the Profession

When people ask us what changes at our life profession, we often joke, “Well, then I’m stuck here and can’t leave!”  In reality, though, the rite of profession formalizes and makes permanent the nun’s interior commitment to live her life in an exclusive union with Jesus Christ.

The liturgical rite for the tonsuring of the stavrophore (“cross bearer”) nun, situated in the context of Divine Liturgy, is adapted from the Great Euchologian.  It marks the commitment of the nun to remain in the monastic life of Christ the Bridegroom Monastery for the rest of her life.  Prior to being made a stavrophore, the nuns relinquishes all money, possessions, property, etc.  Three themes are woven throughout the profession service.  The first theme is the espousal of the nun to Christ as her Bridegroom.  As our Typikon explains, “Monastic chastity is the renunciation of the human marital embrace and the blessing of biological children, in order to exclusively embrace nuptial union with Christ the Bridegroom, which is blissfully real.”  As a symbol of this union, the nuns of our monastery receive a wedding band with “ICXC” engraved on it.  The stavrophore nuns will no longer be addressed as “Sister,” but as “Mother” in recognition of the fruitfulness of their spousal union with Christ. 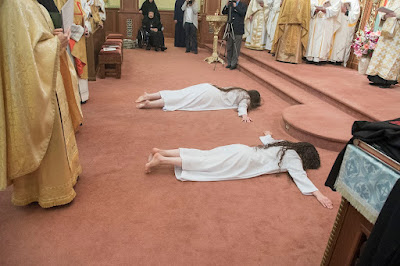 The second theme is that of a second baptism.  The service runs parallel to the baptismal ceremonies of the third and fourth centuries (when Christian monasticism was first established).  The Desert Fathers believed that those who enter the monastic life receive the same grace given as Baptism—that is, the remission of sins.  The nun is unclothed (that is, clothed only in a white robe) as though about to be baptized by immersion, signifying that she is to “put off the old man and put on the new.”  She makes three full prostrations upon entering the church, analogous to the three plunges into the baptismal font.  The vows are taken in response to formal questions, as at Baptism.  She receives, as do the newly baptized, a candle—which is her actual baptismal candle if she still has it.

The third theme is the Return of Prodigal.  The profession service mystically enacts the drama of the return of the Prodigal to his Father’s house.  Entering barefoot and bare-headed, the nun approaches the bishop, who represents the Father, in poverty and repentance.  The tropar of the Prodigal Son is sung as the nun walks toward him and prostrates three times.  The bishop takes her hand and lifts the nun from the third prostration, clothing her, putting sandals on her feet and a ring on her finger (Luke 15:22).

Our monastery prays a chapter of the Song of Songs at the end of Compline each night.  These verses capture the Bridegroom’s call to which stavrophore nuns respond with a single-hearted, all-encompassing, “Yes!”  “Set Me as a seal on your heart, as a seal on your arm; For stern as death is love, relentless as the nether world is devotion.  Deep waters cannot quench love, nor floods sweep it away…” (SOS 8:6-7)  Whatever sufferings the future may hold, our Bridegroom’s love will be our constant support.

Posted by Christ the Bridegroom Monastery at 1:44 PM