The Weight of War: A Mother's Lament - A Reflection from Mother Petra 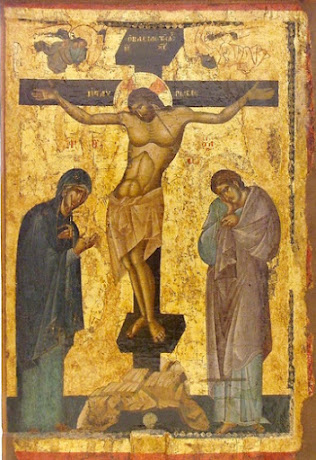 The war sparked by Russia’s invasion of Ukraine has been a poignant, throbbing backdrop for my experience of the Great Fast this year.  On the second day of Lent, I read these words of St. Sophrony of Essex:

“I have been in continuous and terrible pain as a witness to the nightmare of men—who are all brothers—killing one another.  At times, this pain causes me to howl like a wild animal, to yelp like a poor dog whose paws have been crushed by a car.  And just like a dog, shaking from pain, to crawl away from the paths of men.  But when the pain in the heart reaches the limits of our physical endurance, then the invocation of the Name of Jesus Christ brings PEACE which alone keeps us alive.”

My prayer, around which all of my life revolves, has taken on a deeper urgency, and I glimpse the global (even cosmic) dimensions of the prayer of the Church.  I understand that when I pray, the whole Church prays in me, and this prayer is for the whole world.  The pain in my heart is but a taste of the great ocean thundering across the globe.

During the Fast, we once again start reading Scripture at the beginning, with the book of Genesis.  Woven throughout our Lenten prayers is the theme of the Fall, the suffering of Man who has exiled himself from Eden by his sin.  Recently, Genesis 4:8-15, which recounts Cain’s slaying of his brother Abel, was given me to read aloud during Vespers.  My heart grieved as I chanted the dialogue between Cain and God:

[God] “The voice of your brother’s blood is crying to Me from the ground…. [Y]ou shall be a fugitive and a wanderer on the earth…”

Then Cain went away from the presence of the Lord…

Once again, Man is exiling himself by the spilling of his brother’s blood.  We taste anew the bitter cost of sin.

The next day, we read the conclusion of this same chapter in Genesis:  “And Adam knew his wife again, and she bore a son and called his name Seth, for she said, ‘God has appointed for me another child instead of Abel, for Cain slew him’” (v. 25).  Often I have meditated on Cain’s killing of Abel, but never from the perspective of their mother.  Eve, who apparently had never yet known human death, experiences the death of her son Abel, and she clearly understands he was murdered by her other son Cain.  In effect, she loses two sons, the slain and the exiled.  Surely, her agony is compounded by the awareness that she had in some way contributed to this fracture, this rending of her family, by heeding the serpent and grasping after the knowledge of good and evil.

I’ve been praying in recent months about the nature of motherhood as I experience the reality of my own spiritual motherhood:  both the sobering weight to which I consent when I accept a spiritual son, and the mysterious, hidden ways in which I am a mother to souls across the world.  From this vantage point, I looked at Eve’s grief and recognized my own lament over this war in Slavic lands and the choices of my children closer to home as an echo of her lament.  Crying out to the Crucified One as I live these dark days, I have prayed for God’s people, both those with whom I have personal relationships and those suffering in Ukraine and Russia.  Yet I am haunted by the conviction that my own sin has made me in some manner complicit; I am not an innocent bystander.  I also am one who seeks self, objectifies my brother, desires domination, and have harbored hatred in my heart.  As we sing in the Great Canon of St. Andrew of Crete, “I have followed in the footsteps of Cain, I have chosen to become a murderer; for I have led my poor soul to death by living according to the flesh in the wickedness of my deeds” (Ode 1).  This conviction fuels my repentance.

Repenting in my prayer, I suddenly saw Eve’s suffering mirrored, not in my poor heart, but in the pure heart of the New Eve:  The Theotokos looks down from heaven and weeps because one of her sons slays the other.  Each day this blood cries out from the ground!  But Mary stands at the foot of the Cross, ready to receive as her sons both the apostle and the criminal because she knows her first Son died in order to open the way back to Eden for all Mankind.  The flaming sword has been quenched by the blood and water gushing forth from His side.  As disciples of Jesus Christ, she pleads with us to embody His love by living His Gospel of peace in the power of the Holy Spirit given us in baptism.

So as we journey deeper into this desert, of the Great Fast and of human wars, let us offer the Father our repentance as a worthy sacrifice.  Let us assume our great dignity as disciples of Christ by being our brother’s keeper.  Let us vigorously fight evil, not by the world’s violent means, but by the spiritual weapons of the children of Light—prayer, penance, fasting, and self-sacrifice.  And let us keep our heart’s eye fixed on the promise of the Resurrection.

Posted by Christ the Bridegroom Monastery at 6:30 PM